The eagle has landed! 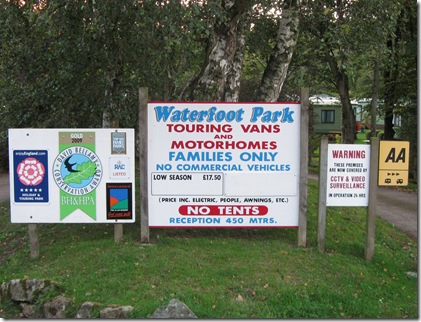 One of our favourite sites.  The touring area is quite small and it always seems to be quiet and peaceful, maybe because no tents are allowed!  Excellent toilets and showers, a small shop, a bar, and only a short walk to Pooley Bridge.  The only criticism of this site is that the hardstanding part of some pitches is very narrow.

An early start meant we arrived before 2pm and there were plenty of pitches to choose from.  No booking in, you find a pitch and then pay later, when the bar or shop is open.

The first pitch sloped a bit so we quickly moved to another, which was much better. 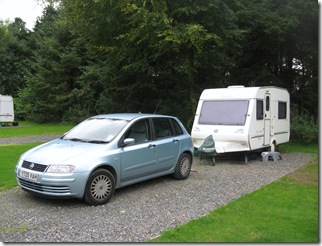 Didn’t take long to get set up, so we headed off to Pooley Bridge for tea and cakes, followed by a couple of drinks in the Pooley Bridge Inn.

No eating out this weekend, so we headed back to the caravan for dinner.  A bit of a scare when we discovered that the fridge wasn’t working, but soon realised we were running it off the battery…rookie error!

A classic walk in the Haweswater area today…D’s favourite place in the Lakes. 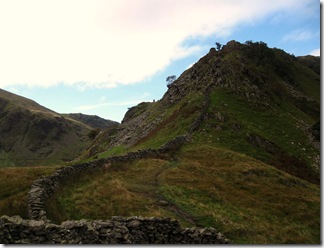 This is the home of England’s only golden eagle, a solitary male who has been looking for a mate for a few years now.  We’ve been here many time but never seen it, but we think we did today.  A big bird, flying high, a long way away, and gone before we could get the binoculars out.  No pic to prove it but here’s one I wish I’d taken! 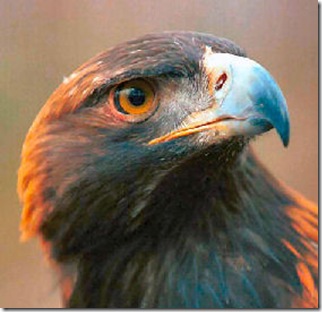 Saw some other interesting wildlife too. 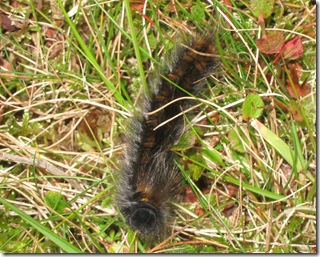 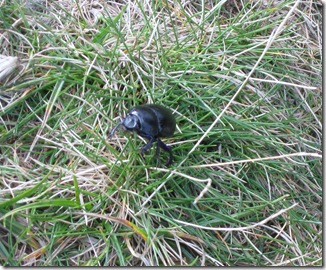 Tasty treats for Bear Grylls, but we had even tastier chicken paste sandwiches!

Even the rocks were smiling! 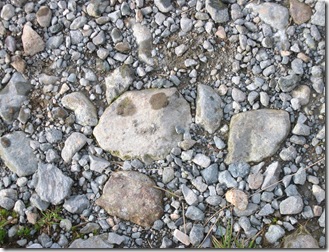 Made it to the top of High Street and tucked into our sandwiches as we sheltered behind a wall.

“Way aye what a fookin view” we heard from the other side of the wall.  He wasn’t wrong. 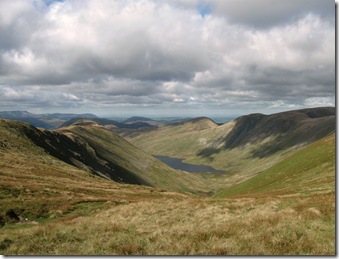 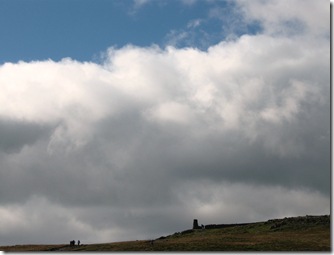 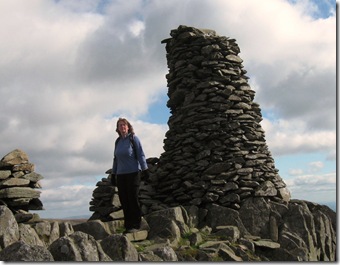 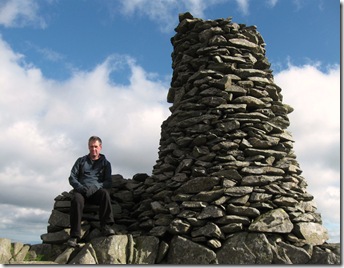 Pretty cold, so we didn’t linger too long, and headed off down the Nan Bield Pass to Haweswater.

Near the bottom, several cyclists raced past us. 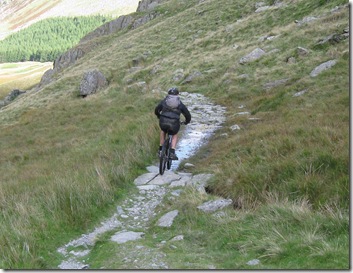 One fell off, got back up, went a bit further, then fell off again.  He didn’t move for ages and we feared the worst, but he was ok.

Stopped off at the Haweswater Hotel for tea on the way back, but after waiting for about twenty minutes we gave up, got a refund and left!

Dinner in the caravan again.  Just managed to cook the pasta before the gas ran out!  We’ve had the same bottle for two years so we suspected that it was probably quite low!

Headed off for the warmth of Pooley Bridge and decided to try a different pub tonight.  Regretted it instantly, no real ale, loud dance music!

Went back to the Pooley Bridge Inn, much nicer.  Got chatting to a couple of locals, one of whom was from Liverpool.  Talked about the decline of L8.

Work, work, work, work, work…don’t you just hate it when work gets in the way of life!  Probably wont be able to get away until November now, when the clocks will have gone back and it will be dark by 4pm and cold and wet and miserable…!!!

Posted by Our Caravan Blog at 19:35 No comments:

Phew, the road closure is not a problem and the diversion is caravan friendly.

We stayed at The Croft, Hawkshead, a few years ago in our pre caravanning days, in a tent.  The “highlight” of the weekend was a fight that broke out in the early hours of the morning.  A noisy, inconsiderate group of campers were set upon by a lone camper who wanted to get some sleep.  A tent was flattened, there was lots of shouting, and from the safety of our tent it sounded like blows were exchanged.  Can’t remember how it all ended, but the solo camper left very early the following morning.

On the principle that lightning never strikes twice we decided to give the site another chance.  It’s easy to get to and is right next to Hawkshead village.  A great location, very handy for pubs

Arrived early, around 2pm, and told to choose our own pitch.   Pretty good reversing from D, for a change.  The pitch sloped a bit from left to right, but as usual we didn’t notice it until everything was unpacked and set up.

A mixture of caravans and campers who wanted electric hook-ups.  Not a problem, we thought, even as a huge tent was erected right behind us by two men.

Strolled into the village for a quick drink.  First the Sun Inn, then the Red Lion our pub of choice for the rest of the weekend.  Decided to return later for dinner.

The Red Lion dates back to the 15th century

Popped back to the caravan to discover that the people in the tent had been joined by a caravan and another car.  Pretty noisy already! A couple of small children crashed their bikes into next doors caravan and then cycled right across our pitch.  Were told off by the dad - but only for cycling too near the guy ropes on their tent!

Shower / toilet block immaculate, always looked liked someone had just been in there to clean it.  Only downside was the push button shower – 7 seconds it stayed on for! Now do you press it 10 times a minute, or hold it in and shower with one hand?  It’s a tough one!

Lamb stew in the Red Lion.  D impressed with the local beer…Windermere Pale.

Got back to the caravan about 10.30.  The group of people behind us were chatting away, and some other people in a caravan opposite were talking noisily, too.
Oh well, the no noise after 11pm rule would kick in soon, or so we thought.  The caravan people did quieten down, but the group behind us carried on…and on…and on.  At about 1am somebody complained and about half an hour later everything was quiet!

Day 2
You may recall from the last post that we bought a watercolour of Blea Tarn, and we thought it would be a nice idea to go there and get a pic… 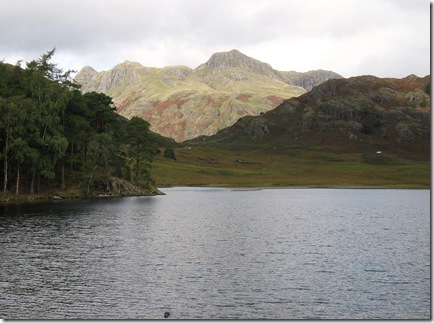 “If you see a black and white dog answering to the name of Flo…” a man asked us in the car park.  Poor Flo had been missing for about three hours.  We never saw her.  Wonder if she ever turned up?  Guess we’ll never know, unless her owner reads this blog…!

A bit of a squeeze, though… 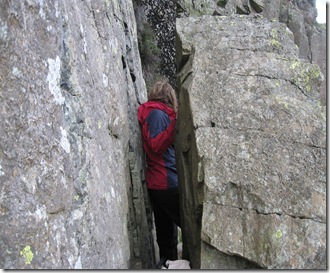 The pic of D squeezing through is too embarrassing to publish!!

On our way down we passed some fell runners who seemed to be having a great time…not! 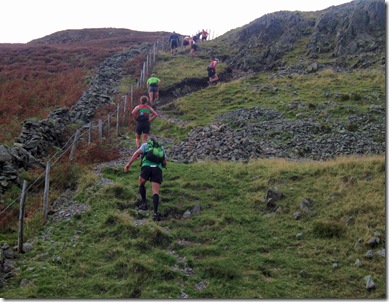 Dinner in the caravan, then back to the Red Lion for a drink.  No Windermere Pale, tonight…sold out!

Who let the dogs out?

We were expecting another noisy night and we weren’t disappointed.  When you are tucked up in bed you don’t want to have to get up, get dressed and go out in the rain to argue with a load of drunks.  Thankfully, we weren't the only ones being disturbed - the site owner had got a call from another caravanner and stormed over at 1.30am to tell them to shut up.  Ignorant, inconsiderate, selfish…argh, that’s enough moaning!
It rained all night, too, so all in all a pretty miserable night!

Still raining in the morning, so we got soaked putting everything away.

It’s worth noting that the stabilizer didn’t creak once on the way home, presumably because it was wet.  Will pour some water over it before we set off next time!


I don’t think we will return to this site because the owners don’t enforce their ‘no noise after 11pm’ rule.  The group behind us should have been asked to leave after the first night!
Coming soon…Waterfoot Park, Ullswater.

Last trip for a while?

After a three week break it was back to the Lake District, to the Windermere C&CC site. 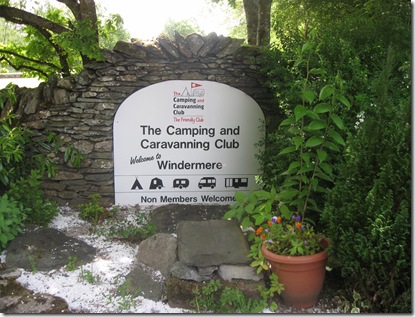 A bit of a misnomer, because Windermere is a good fifteen minutes drive away, but we like this site.  It’s easy to get to, quiet, and has great toilets and showers.

The village of Staveley is just about walkable, so on arrival (after a very poor display of manoeuvring skills) we set off across farmland for a pre dinner drink.  A choice of pubs – we chose the Eagle and Child, where we sat by the river and watched the local fishermen in action! 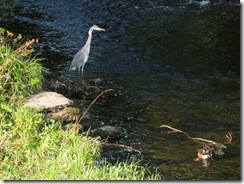 Then back to the site for another not very successful BBQ.  The problem this time, disintegrating minted lamb kebabs, which fell into the coals and put them out!!  Next time it’s back to basics - burgers and sausages…serves us right for trying to be adventurous!

Because there are no pubs within easy walking distance, we decided to give the on-site pub a try, The Whispering Pig.  We don’t really like on site pubs, they always seem to be full of static caravan owners bragging about their expensive foreign holidays, and this was no exception.  Not that we’re jealous, you understand!

Weather forecast good, so after a hearty breakfast we set off for Grasmere.

Fairfield (873 metres) was the high point of a circular walk that also took in Great Rigg and Stone Arthur.  About six miles, very hot and humid to start with.

Wonder what this is?… 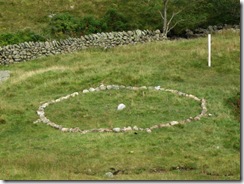 The final climb to the summit included a short but steep section of loose scree, much harder than the pic below suggests. 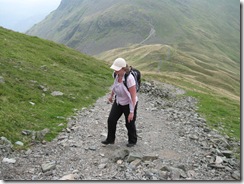 Much cooler at the top! 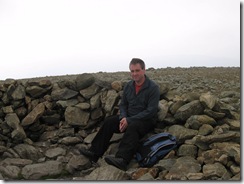 After tea and no scones (sold out!) in Grasmere, we popped into the Heaton Cooper gallery.  Couldn’t resist buying a couple of watercolours, of Wastwater and Blea Tarn. 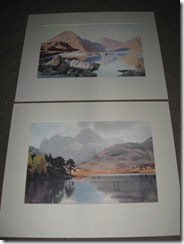 D very tempted to stay for the Grasmere Guzzlers real ale festival, but as drink driving is frowned upon these days we thought better of it and headed back to the caravan.

After splashing out on the artwork we needed to find somewhere cheap for dinner, and you can’t get much cheaper than the Crown Carvery in Bowness…£3.59 for as much as you could fit on your plate (and some diners could have won a prize for it!)

Stopped off at the Watermill Inn in Ings on the way back.  Very impressed.  Not within walking distance of the site, but only a short taxi ride away.  We’ll be back.

Must explain the title of this post…last trip for a while?  The road to our caravan storage site is going to be closed for 6 weeks, starting tomorrow!  We have been assured that we will still be able to get in and out, the advice being to contact the contractors or local police if we have any trouble!  I can’t see it being a high priority for the police, so who knows…!

Might have to rough it in hotels for a while!