Nearly a pitch with a view!

Castlerigg Hall, Keswick, a last minute booking – we’ve tried many times to get into this site in the past only to be told it is fully booked, but we were lucky this time.  Not lucky enough to get a pitch with a view, but a pretty good pitch anyway.  Our first visit to north Cumbria this year.

Arrived and settled into pitch 18.  A nice spacious pitch, but not as good as pitch 22, opposite, which has a great view and was vacant. 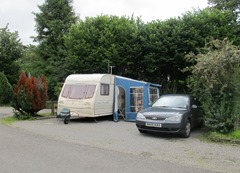 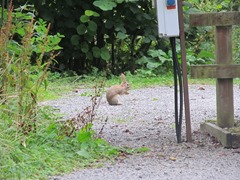 A visitor to a nearby pitch

The weather was a bit iffy but we donned waterproofs anyway and set off on a short circular walk from the site, picking up a few geo-caches and admiring the local wildlife on the way. 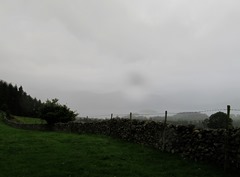 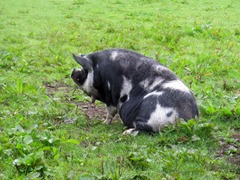 Stopped off for a drink in the neighbouring Heights Hotel on the way back.  The bar is small and quite dated, but has a certain charm.  A totally vegetarian menu, including crispy duck without the duck, but no food tonight because the owners wife was ill.

Three Wainwright’s today…Sail (773 mtrs), Scar Crags (672 mtrs) and Causey Pike (637 mtrs), total distance just under 6 miles.  With hindsight it would have been better (but not easier) to do the route in reverse, starting with Causey Pike, but it was still an enjoyable walk. 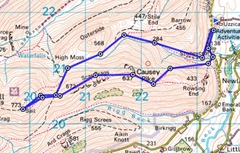 It rained a bit, but that is what waterproof coats are for, and there was quite a lot of blue sky between the showers. 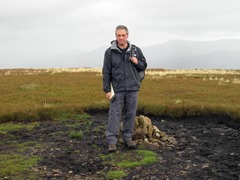 The not very impressive summit of Sail 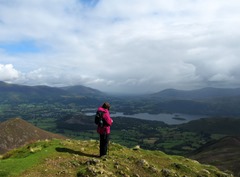 J enjoying the view of Derwent Water from Causey Pike 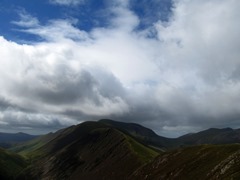 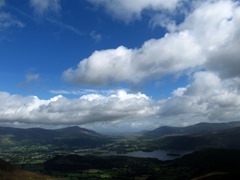 A bit of excitement when we got back to the car, with a mountain rescue landrover racing up the path we had just come down.  This is what happened according to the Keswick Mountain Rescue report:

“An 86 year old lady, walking with family, fell awkwardly on to rocks near the Stoneycroft track. She suffered head and arm injuries. The Team's assistance was requested, and they administered First Aid at the scene. She was then stretchered down to the road, where a civilian ambulance took her to West Cumberland Hospital for treatment.”

Hope she was ok.  Will we still be walking when we are 86?

The weather was improving and it was still quite early, so we decided to drive about 6 miles to Buttermere, and had a look at the lake and a drink in one of the pubs.  We would like to stay here one day but there are no caravan sites, so it will have to be one of the two pubs.  Maybe later this year. 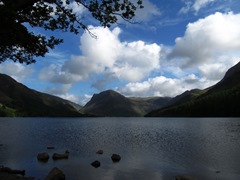 Back at the site we had dinner at the on site restaurant, which was excellent.  Great steaks.  Then back to the Heights Hotel for a couple of drinks before bed.  Lots of same sex couples and amorous dogs in the bar!  Good beer, though, and a nice relaxed atmosphere.

No blue sky at all today, although it actually rained less than Saturday.  We strolled into Keswick via Castlehead Wood and Friars Crag, and along the lake. 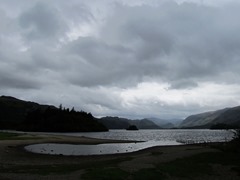 Stopped for a cup of tea by the lake, entertainment courtesy of a birds nest in the roof, with the mum and dad flying in and out with food.  Very disappointing pictures, but the best of them is below. 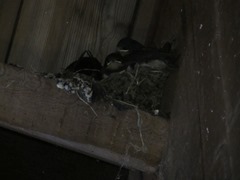 J’s walking shoes started to disintegrate on the way, so she bought a replacement pair, and D bought a quite expensive fleece that he really didn’t need!  Ate in the town centre, then back to the site for a takeaway pizza from the on site restaurant.  We thought about going back to the Heights Hotel but stayed in drinking wine instead.  A very windy night. 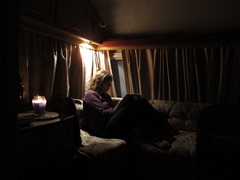 Pitch 22 still vacant…grrrr!  We could have had that pitch!  D can’t remember if he asked for a pitch with a view when he booked, but grrrr! 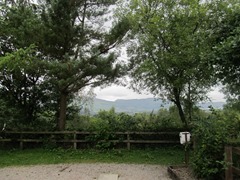 This is pitch 22, the pitch we should have had!

Light rain as we packed everything away, including the awning!  It’s been a while since we had to pack the awning away in the rain, but it was only light rain.

Asked at reception if we could book a pitch with a view for next year but it seems they only take week long bookings so far in advance, not weekends.  Not sure we like that policy!

Three nights in Hawes, our third trip to Yorkshire this year.