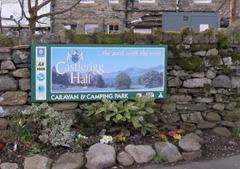 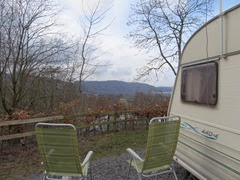 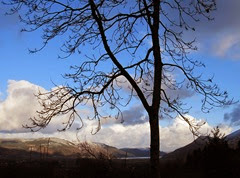 It would have been even better if Spring hadn’t been put on hold and it was warm enough to sit outside and admire the view, but you can’t have everything.

It’s a long journey to Keswick, but we managed to get there quite early in the afternoon and after setting everything up we decided to go for a walk up nearby Walla crag instead of heading for the nearest pub.  Only just over a mile, but quite a steep climb.  The blue skies quickly gave way to cloudy, showery weather, but still excellent views from the top. 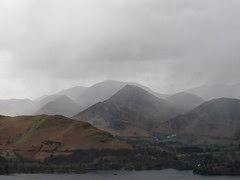 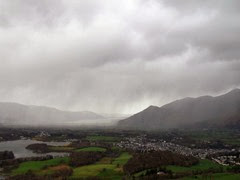 The weather deteriorated, so much so that we didn’t dare venture outside the caravan in the evening, so we stayed in trying to listen to the radio over the sound of heavy rainfall.  We got a shower going for a shower!

Not a particularly good day weather wise, so we strolled into Keswick and had a look around the town.  Don’t mention waterproof jackets to D!  He bought one, but changed his mind after wearing it for about half an hour.  It couldn’t be returned as it was worn in the rain and the tags were taken off, so its now on eBay!

In the evening we had dinner at the onsite restaurant and then a quick drink at the Crag Bar, part of the nearby Heights Hotel.  The only pub we visited this weekend, which is something of a record for us!  The Crag Bar is okay (it sells Loweswater Gold) but somewhat lacking in atmosphere, and the only other nearby pubs are in Keswick.

Much better weather today, so we drove to Bassenthwaite for a short but steep walk up Barf (468 metres) and Lord’s Seat (552 metres).

There are two ways of getting up Barf.  A direct ascent, which is a steep scramble over loose scree via “The Bishop”, or a (not) much easier route alongside Beckstones Gill.  We chose the easier route, which was still pretty hard going. 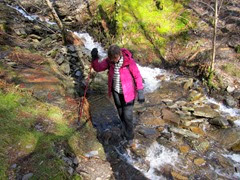 The Bishop of Barf

On a rocky site at 700 ft and clearly visible from the Cockermouth to Keswick road, is the "Bishop of Barf", a white painted stone marking the spot where, according to local legend, the Bishop of Derry was killed falling from his horse in 1783, after drunkenly betting he could ride up the hill. Both the Bishop and his horse are said to be buried near a smaller stone, the Clerk, at the base of the hill. The stone was whitewashed each year by staff at the nearby Swan Hotel, until the Hotel was converted to apartments. The whitewashing is now carried out by members of Keswick Mountain Rescue. 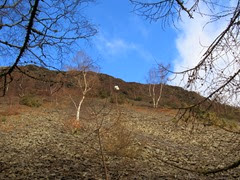 Excellent views from the summit.  Lots of pics in the gallery. 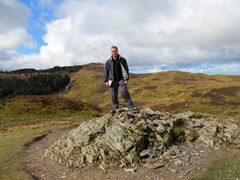 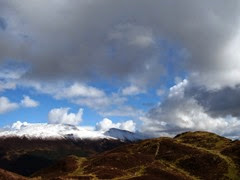 A not very well hidden geo-cache near the summit of Lord’s Seat, and the view from the cache site… 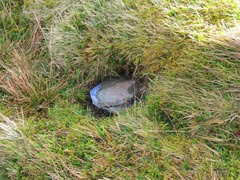 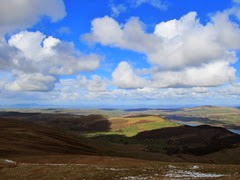 The plan was to come down through Whinlatter forest, but there was a mountain bike race on and we would have had to keep jumping out of the way of cyclists, so we decided to more or less retrace our steps.  It was actually harder going down than coming up! Luckily D found a good stick… 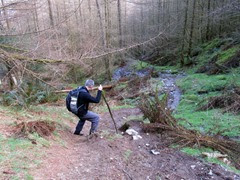 The weather was so nice we toyed with the idea of having a barbecue, to the point of buying coals and sausages and burgers, but it was just a bit too cold!  We lost our nerve and cooked them in the caravan instead.

The onsite shop had a very good selection of bottled beers, so we stayed in again.  A very cold night, minus 6 according to the very friendly warden, whose caravan was opposite ours.  Nice sunset, which we enjoyed from our pitch with a view… 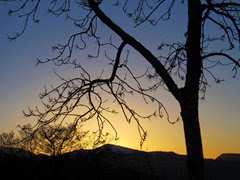 A birthday breakfast for D today in the onsite restaurant!  Then the long journey home….

Nothing booked, D struggling to get time off work at the moment!

Our most visited site…the C&CC site at Windermere.  Must be in double figures now.  There’s not much wrong with it…easy to get to, quiet, good facilities and nice pubs a short walk away in Staveley.

It doesn’t take us long to set everything up these days, especially if we don’t bother with the awning, but D had to replace the freshly cleaned flyscreens this time.  Losing one of the end clips and breaking another one didn’t help, but they do look much better now so it was worth doing.  We found the missing one when we got home! 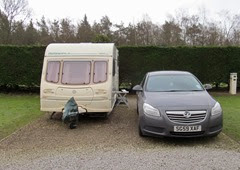 As is customary when we visit this site, we headed off across the fields to Staveley, stopping to check on our geocache on the way.  Still nice and dry, and still being regularly found.

A couple of drinks in the Eagle & Child, then off to the Hawkshead brewery beer hall, the intention being to eat there.  They do really nice beer tapas…usually.  Not today, though, because it was the weekend of their Spring beer festival 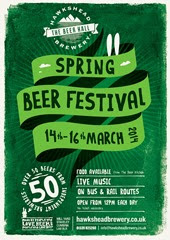 D managed to sample quite a few, not all pints, though!  J stuck to Lakeland Lager.  The trouble with beer festivals is…too many people!  Couldn’t get near the bar, and nowhere to sit.  We managed to perch on some packing cases for a while.

A short drive to Troutbeck to bag a couple of Wainwrights – Sour Hows (483 metres) and Sallows (516 metres).  About 4.5 miles in total.  We are running out of easy to get to Wainwrights now, might have to start walking longer distances soon! Not especially high, but pretty wild and windy at the top.  Quite a grey day, so not many pics…not much sign of spring today. Hardly saw any other walkers, but a popular route for cyclists 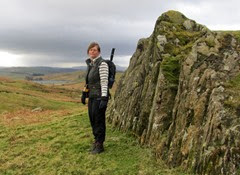 In the evening we headed back to the beer festival and managed to sample a few more beers.  D’s favourite of the weekend was Lumford from Thornbridge brewery.

A bit of everything really!

A spectacular sunset over Staveley which we all but missed because we were too busy drinking! Didn’t stay all night, but it was still a 40 minute walk back in the dark.  Stopped off for a giant tray of chips for sustenance!

Listened to the Archers on the way home, followed by most of Desert Island Discs featuring the voice of F1…Murray Walker.  Did you know he had a successful career in advertising, too?  “Opal Fruits…made to make your mouth water” was one of his slogans.  You probably wont know what Opal Fruits are if you are under a certain age!

Posted by Our Caravan Blog at 08:27 No comments:

Our first ever caravan trip…re-created 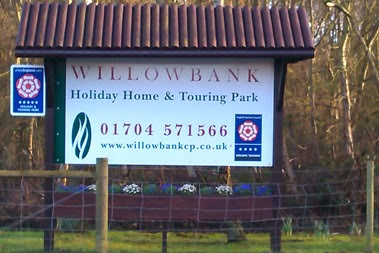 No caravan trip for three months, so it seems we are not winter caravanners after all.  Well, the weather hasn’t been great, has it!

We usually like to start each year with a local trip to make sure the caravan has survived the winter and ease ourselves back into it.  Willowbank caravan park, Ainsdale, this year.  We came here when we got our first caravan, several years ago, well before we started blogging

Our first ever trip was a bit of a disaster because we bought the caravan without any accessories…battery, hookup lead etc, and spent the weekend traipsing around caravan accessory shops.  A few things didn’t work either, and we generally didn’t know what to do!

No such trouble this time, with everything in working order…apart from the things that have never worked and we have never got around to fixing. Only minor problem was a perished seal around the water inlet but we had a spare.

All it needed was a good clean, and a bit of Silky soon had it gleaming

Things that don’t work in our caravan

Time to get a new one?

Not far from home, so a very quick journey.  The site was not very full and we were the only caravan in a cul-de-sac of 12 pitches. 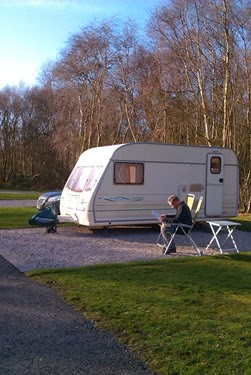 After setting everything up we went for a stroll in the nearby sand dunes and ended up in Ainsdale village, which is home to a nice Toby Carvery, so we stayed for dinner.  Spent the rest of the evening in the caravan, listening to the radio.

A walk through sand dunes and woodland.  Near the beginning we came across this sign: 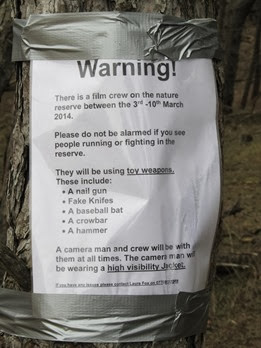 Sadly we never saw anything, we were hoping we would be called on as extras!

We ended up at the beach and walked to nearby Freshfields – an affluent area popular with footballers and celebs - then jumped the train one stop to Formby for a pint in the Railway Inn, then back to the site. 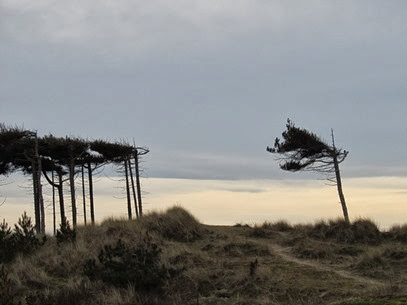 A quick shower then we headed into Southport for a walk along the pier and dinner in a Chinese restaurant, which was nice apart from two drunken cockney lads with tourettes on a nearby table.  The food was good and we even tried a Chinese beer.

Afterwards, a quick drink in Wetherspoons, then back to the caravan for more radio and scrabble.  J used all her tiles with ‘AUDITED’ so the game was effectively over from early on!