Went to have a look at an Abi Sprinter 400D van today. Had a good poke around, and couldn't find any signs of damp anywhere. Bed a bit smaller than we are used to, so will be very cosy!

After a lot of haggling we managed to get an offer accepted for less than the asking price and we did get more than we thought our van was worth in part exchange (more than we bought it for!) Put a deposit down and just keeping fingers crossed they think ours is worth it when we take it there in 2 weeks time. Ours is in great condition so should be okay

Things going for it:

All minor things that are easily sorted. A small price to pay for a dry van that's lightweight and newer.

Posted by Our Caravan Blog at 21:40 No comments:

First trip of the year to the CCC site at Ravenglass, D's favourite site. A bit of a trek on A and B roads but well worth it. 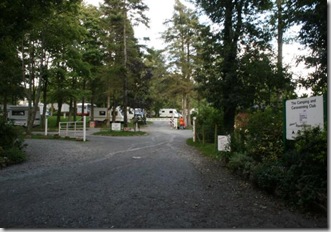 Arrived early on Friday and set up in no time at all. 10/10 for D's reversing skills - leave him to it and he's in there no problem, but as soon as a friendly warden offers advice he’s all over the place!
Caravan fully functional now, no problems this time apart from a slight hiccup with the hook-up, (fuse cut out twice) Was a bit of a worry but didn't happen again so presume was the site's doing. Even got a few tv and radio channels, which is unheard of! Decided against the tv after 10 minutes of putting up the aerial, and put it back in the car.  Can never find anything decent to watch at home with 10 times as many channels!

Strolled into Ravenglass....but it was shut! Even the pub was closed! Only the post office / mini market open. D was disappointed that the owner's cat wasn’t there this year. It was a huge ball of fur that slept on top of the ice cream freezer. I'm sure it breaches a few health and safety rules but no one seems to mind! 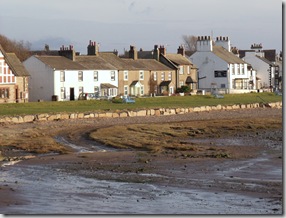 A short drive up the road to Drigg in search of tea and scones. Followed brown "craft centre" signs to Drigg railway station which promised coffee and crafts. Went through what looked like somebody's front door and found ourselves in a little room with handmade gifts and postcards. Asked where the cafe was located and were pointed towards a pair of curtains. Peered through them half expecting a fortune teller, and found ourselves in an even smaller room with barely enough room for the 3 tables. Was like sitting in someone's living room, a most surreal experience! The owner, who was friendly and quietly spoken informed us there was no tea on offer just coffee, and all the good cakes had gone but there was some nice caramel shortcake. D had his eye on some lovely watercolours but they were a bit pricey. Nothing else in Drigg at all, so drove to Wasdale Head and had a drink in the Inn. D very pleased they had Ennerdale Blonde beer!

Dinner in the caravan, followed by drinks in the Ratty Arms. The pub is situated at Ravenglass railway station. 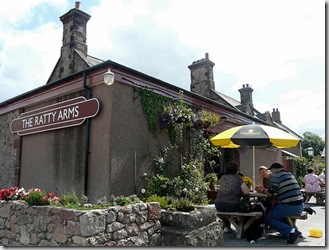 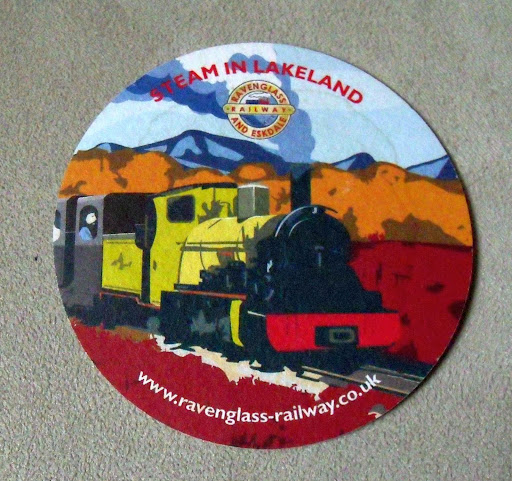 It was once the station building for the Furness Railway, and it’s annexe is the old waiting room. Not a very good selection of beer this time which was a bit disappointing, but it has a nice atmosphere.

Saturday, not a good night's sleep. rained most of the night and as we were under trees it sounded like there was a flock of birds jumping up and down on the roof!

Drove to Ennerdale Bridge and walked around Ennerdale Water, about 7 miles and took about 4 hours in all. J very pleased, no mountains this time! Cold and windy to start but it soon cheered up. Quite level most the way round but very enjoyable all the same.

Back at base, had a shower then made up the bed before going out – big mistake!

Lovely sunset overlooking the estuary. We were joined by a local cat, a small child attracted by the cat, a parent trying to get the child away from the cat, and a hysterical teenager and her boyfriend, complete with tinny music from a mobile phone. The cat and the child were ok, but how far do you have to go to get away from teenagers fiddling with mobile phones?! 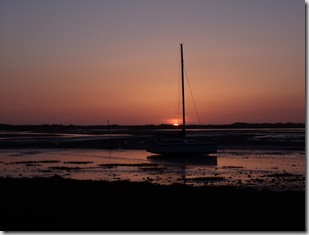 Had a huge dinner in the Ratty Arms and a bottle of wine. Uh oh, it was only 9pm, peaked too early again! Too full to drink any more, too cold to stay outside, so back to the caravan, but.....nowhere to sit! So, straight to bed at 9.45! This caravan is TOO SMALL! We need a bigger one with a fixed bed and somewhere to sit...watch this space.....

So tired we slept for 11 hours! Just had time for a quick bacon sandwich before packing up and leaving. A successful trip apart from the electrics drama, and nothing fell off this time!

Posted by Our Caravan Blog at 20:43 No comments:

Well, the caravan got through the winter in one piece - no signs of damp thankfully and off we set for Waterfoot Park in Pooley Bridge - a nice site we have visited before

99% of the journey was uneventful then just before we got there, we noticed 'ROAD CLOSED AHEAD' signs. Anybody else would quickly find an alternative route, but not us - we drove right up to the barrier (half expecting them to let us through) and were met by a local worker who seemed to have trouble speaking. Now, this is not good if he's explaining the alternative route (we did catch something about right at the roundabout - but which one?) After a fabulous 3 point turn by D off we went back the way we came and over the M6 towards Penrith. Found the right road, but about half a mile from the site we were met by more cones. After explaining we were staying at the park they let us through. Seemed the road was being re-surfaced so was closed at both ends. D in a right state at this point thinking of the trouble it was going to cause


We chose the pitch and set up. We're now in our 3rd year of caravanning so can connect everything up in about 10 minutes. First fault found grr.. the cover for the water inlet fell off on the way, was a bit loose but thought it would have held a bit longer.

Wandered down to the village but not much open as still a bit early in the year. Found a teashop with no one in it just the owner hoovering, very pleased he had a customer. Had lovely cream tea then walked back to the site. Had an uninspiring microwave dinner, quick shower and made up the bed, then back to the pub for the rest of the night.

Was a bit scary walking there and back as its pitch black - no street lighting at all until you get to the village. Seems a very safe area but you never know what wildlife is going to jump out at you. Came across a huge dead rabbit in the middle of the road. D calmly pulled it to the grass verge by its ears. No sign of it the next day - was probably taken away by a fox, but I like to think it was just a bit stunned and ran off.

Weather really cold that night, brought in the water pump as it was well below minus. Was quite warm once in bed but didn't sleep well as kept waking up with freezing cold eyelids! Had a bit of breakfast then set off for Angle Tarn


Second disaster of the weekend, the drainage plug snapped in half - all the pumped water trickled down the side of the caravan. No spares shop for miles so had to resort to using a 5 litre water bottle for everything, bit of a pain boiling the kettle to wash up.

Ran out of cash so headed into Penrith, forgot about the closed road and drove straight past the steamroller and over the fresh tarmac - D hysterical when he saw the tyre tracks in the rear view mirror. Was let out the other end, but told off for going down there (by the man with the speech impediment) Also needed a light bulb for the table lamp but Morrison's was having a refit so ended up in Wickes paying twice the price.

Booked a table for dinner earlier in the day at the Pooley Bridge Inn. Arrived to find we were on the worst table they had - under the tv and almost touching the settees in front of the fire (which sat 4 loud people and their dogs) Nice dinner all the same and not expensive. Had a drink at another pub but not so nice inside, also was short changed at the bar - don't think he believed I had given him a twenty pound note. Then was back to the caravan. D getting fed up of making up the bed every night (my job is to put it all away again) he's determined to get a bigger van now with seating at the back so we can keep the bed made up.

Packed away early next morning and set off for home. Dropped van off at the storage place then went to Discover in Delamere, Cheshire to get a new water plug and Truma cover. Spent a while looking inside the caravans and motor homes. Noticed we were overcharged on the cover so had to fill in a 2 sided form to get a pound back! Went back to storage place but D opened bag too quickly and dropped the fixing pins on the gravel. Looked around hopelessly but no sign so had to order some off eBay (is there anything you can't buy from there?)

Posted by Our Caravan Blog at 23:40 No comments:
Newer Posts Home
Subscribe to: Posts (Atom)