Last trip of the year?

An excellent weather forecast for the weekend, so a last minute trip to the Windermere C&CC site.  Our second visit this year.  We wanted to come here for the Hawkshead Brewery summer beer festival, but it was full, so we went to the Kendal CC site instead.

Arrived early, and plenty of pitches to choose from at this time of year. 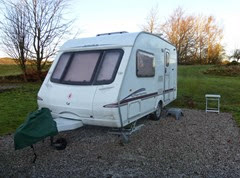 First things first –  we needed to get a replacement gas bottle as ours had completely ran out.  D staggered to reception with it, only to be told they had none left!  The warden must have felt sorry for him, and gave him a quarter full bottle which a more organised person had previously swapped…for free! That should see us through a few more trips.

As is customary at this site, we headed straight for Staveley as soon as we had finished setting everything up.  Checked on our geo-cache on the way, and tried to find another one but D slipped climbing over a stile and pulled a muscle in his leg.  Lots of swearing and shouting…the gist of which was **** the cache!

Fabulous weather for the time of year today.  We drove into Staveley and set off to visit Potter Tarn and Gurnal Dubs, no summits today. 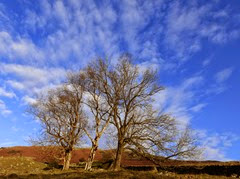 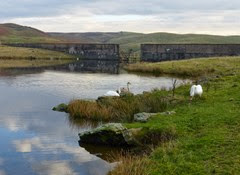 Then the much prettier Gurnal Dubs… 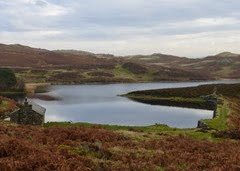 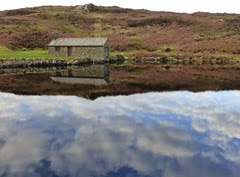 Afterwards stopped off at Wilf’s Cafe next door to the Brewery for tea and cake, then drove to the Watermill Inn, one of our favourite pubs in the area, and D was delighted to discover that they had Loweswater Gold…except it wasn’t Loweswater Gold.  We both agreed it wasn’t, but the barman insisted it was.  He made some excuse about Cumbrian Legendary Ales having a new head brewer, but it didn’t improve the taste!  It’s won so many awards there is no way they would change the recipe.   D drank it anyway!

After last night’s excessive drinking it was a quiet night in with a ready meal and soft drinks tonight. 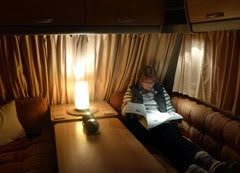 It rained a bit in the night and a constant drip, drip, drip kept us awake for ages…

Turns out the dripping was a leaking skylight in the washroom…the first problem we have had with this caravan.  Luckily it drips into the shower tray so no flooding.  Have ordered a replacement from Ebay for around £40 which is the whole unit including flyscreen.

Another lovely day, weather-wise, and just enough time for D to rush up into the hills to take a few pics before we headed for home. 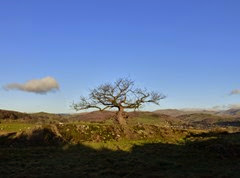 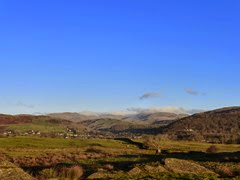 Nothing planned, this might be our last trip of the year with Christmas looming!  It depends on the weather.

Posted by Our Caravan Blog at 20:30 No comments:

The Croft, Hawkshead.  We’ve been to this site a couple of times before and were troubled with noisy neighbours on both occasions, but we thought we would give it another go.

The site has gone upmarket since we last visited, with lodges where the touring pitches used to be and hardstanding pitches in the field that used to be set aside for camping.  A big improvement, we think.  The facilities have been improved too, with a couple of unisex shower rooms as well as the usual ladies and gents toilet blocks.  There is even a room with a spotless bath in it, but J’s excitement quickly turned to disappointment when she found there wasn’t any hot water for a bath.

Plenty of pitches to choose from when we arrived. 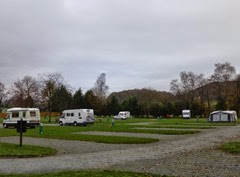 That’s us right at the back – anyone would think we were antisocial!

Hawkshead village is literally across the road from the site, and that is where we went after setting everything up.  Bought a new pair of walking trousers each from one of the outdoor shops…Craghoppers Kiwi Pro Active.  Very stretchy and water repellent - about time we had some decent walking trousers!  Also a  trip to the Hawkshead Relish shop for the customary jar of Westmoreland chutney and some nice crackers.

First pub of the weekend was the Kings Arms Hotel, which is nice but has a very small bar area.  Luckily we got there just at the right time and managed to get a great table in the corner.  D pleased to see Loweswater Gold on offer, not surprising really as Cumbrian Legendary Ales brewery is just down the road!

When it started to get really busy we relocated to the The Sun Inn.  We were about to leave when plates of fish and chips were delivered to the table next to us, and we just couldn’t resist...Bang goes our promise of eating in the caravan this weekend!

We spent the rest of the evening in the caravan.  There was some noise from a cluster of motorhomes on the other side of the site, and a lot of noise from one of the lodges or static caravans, but neither really bothered us.  A much quieter site this time, which is what we like.

A disastrous walk today.  What we thought were tracks on the OS map turned out to be private roads, so what was supposed to be a circular walk in the hills around the village turned out to be an out and back walk to Moss Eccles tarn.  Still better than sitting at home, though and the rain kept off. 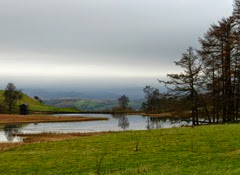 Wise Een tarn, on the way to Moss Eccles tarn 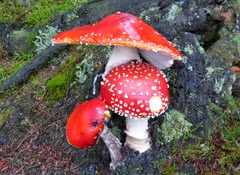 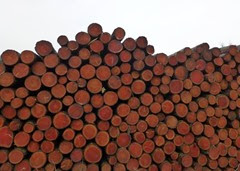 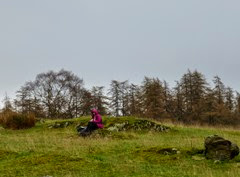 Not a great day for pics, especially disappointing for D as he has just bought a new camera!

In the evening we headed back into the village and tried the Red Lion Inn, which was our least favourite pub of the weekend.  We quickly moved to The Kings Arms Hotel and managed to get the same table as yesterday.  The same group of people as on the previous day ended up sitting next to us again.

Steak and chips in the caravan, followed by another night in.  We had intended to go back into the village but we were tired after our walk which ended up being 8.5 miles, and the three pints we (D) had had earlier had taken their toll.

Left early.  No bacon butty today when we discovered our gas had run out.  Oh well, it had to run out sometime, it’s lasted a few years.  Will have to exchange it when we go away next.

Nothing planned but we hope to get at least one more trip in before Christmas.

Posted by Our Caravan Blog at 07:15 No comments:

Castleton in the rain

Back after a break of three weeks, it’s almost as if we waited for the bad weather to return!  We’ve been really lucky with the weather this year, but it had to run out sooner or later, and it ran out this weekend in Derbyshire.

Actually, not a weekend.  A Thursday/Friday trip, due to the Castleton CC site being fully booked every Saturday for the rest of the year.  A victim of it’s own success.

The site was pretty empty when we got there, so plenty of pitches to choose from.  We’ve been here a few times and usually opt for the same area, but we decided to try a pitch at the back of the site this time.  There aren’t really any bad pitches here. 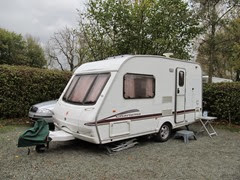 Castleton is only a short walk from the site.  There aren’t many shops in the village and most were shut, so there wasn’t much to see.  Instead we had a couple of drinks in a couple of the pubs, followed by dinner.  A mix up with our Tastecard at Ye Olde Nags Head meant we had to pay full price.  Apparently there is another Ye Olde Nags Head in nearby Edale!

It rained quite a bit in the night, but when we got up it was relatively okay, so we set off for a walk up Win Hill (462 metres). At the top lies Win Hill Pike, locally known as the Pimple 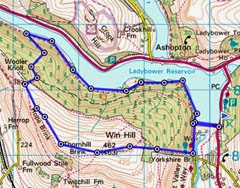 A couple of heavy showers to start, followed by a spell of continuous heavy rain,  and a race against time to get the waterproofs on!! 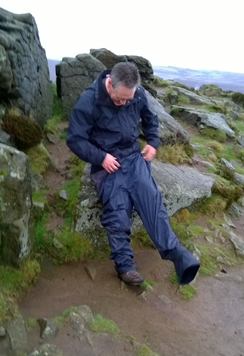 We made it to the top… 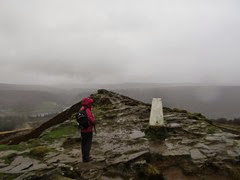 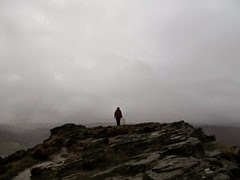 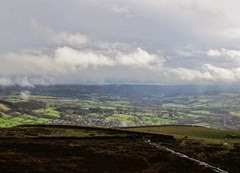 Not a good day for pics, so not many here!

Back at the site we put our soaking clothing in the very handy drying room and settled down in the caravan.  We had to wait until about 5.30 for the rain to stop but we got to the Cheshire Cheese Inn just in time for their earlybird special menu.  Unfortunately we didn’t fancy anything on it, so ended up paying full price for two massive meals.  We didn’t really need the bread basket side order that J asked for, but you can’t have fish and chips without it!

As we were finishing our meal a massively overweight couple waddled in, and as the only remaining table was a tiny one in the corner right next to us, we decided to leave before the embarrassment of watching them wedge themselves in.

There are six pubs in the village.  We’ve been in four of them.  One we have never been able to get in because it is always full, and one we have always avoided because we thought it didn’t look very nice…the Peaks Inn.  It’s had a makeover, so we decided to give it a go and it turned out to be really nice.  That’s at least five good pubs out of six in the village now.   It amazes us how such a small place can have 6 busy pubs no matter what time of year

A quick game of scrabble back at the caravan, then bed (D lost again)

Just managed to pack everything away before it started raining, then a long journey home.  We can’t recall ever travelling with the caravan on a Saturday before. We would certainly have remembered the huge volumes of traffic!

We are hoping to get at least one more trip in before Christmas, weather permitting, and the frontrunner at the moment is The Croft, Hawkshead. 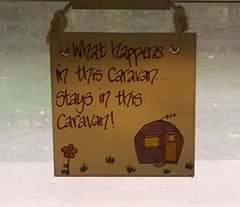