A half decent weather forecast, nothing much to do this weekend, so a last minute trip to the much visited Kendal CC site. 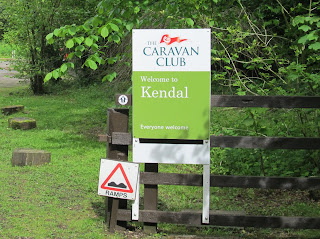 Arrived dead on 1pm, which is the new earliest arrival time for this site.  The wardens were being quite strict, apparently, making people who had arrived earlier wait, but no such problem for people like us who take notice of the rules. 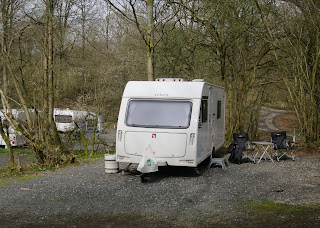 Lots of pitches to choose from.  The trees have been thinned out a bit since we were last here, or maybe it's just the lack of leaves on trees at this time of year, but the site felt more open than previously.  Our bird feeder was an instant success.  Normally birds won't come near it if we are outside, but today they were much bolder than usual.  No new sightings, but plenty of the usual ones. 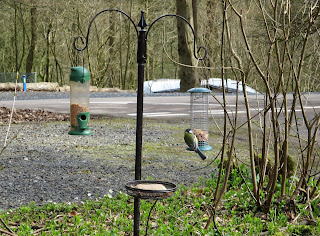 We sat outside enjoying the fine weather for a bit, then walked to a nearby bus stop and got the 555 into Kendal.

We've never really been to Kendal before.  It's a lot less touristy than other towns in Cumbria, which is not a bad thing, and we had a look around the castle, but we couldn't find any pubs we liked and we didn't stay out late.  Instead we got a bus back to the site and had fish and chips from the visiting van.  It started to rain in the evening, so we didn't go out again. 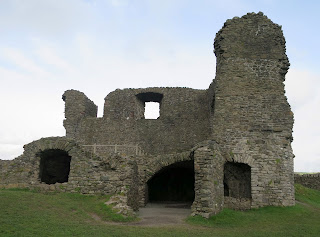 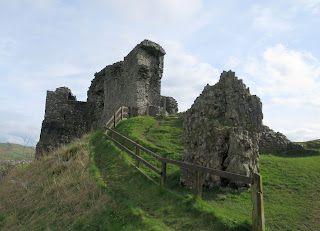 The search for a static goes on.  There was one for sale at not too far away Newby Bridge caravan park.  Too expensive, fees too high and sold before we had even left the house, but we've only ever passed through Newby Bridge so we thought we would have a look at the site anyway.  There is a public footpath running through it. 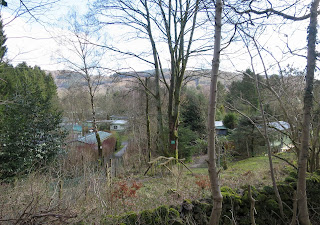 A nice, quiet site, but too expensive for us.

We carried on to Bigland tarn.  Excellent walking conditions, but the ground was very boggy. 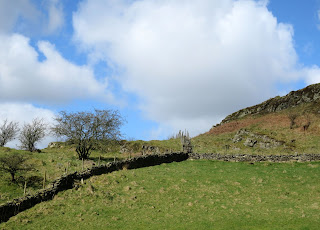 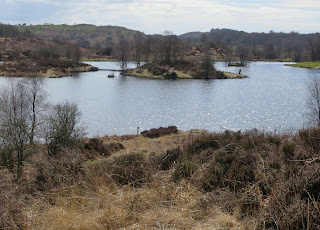 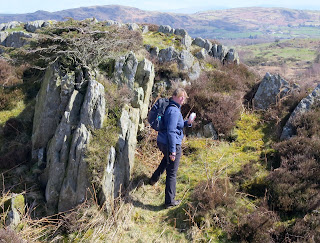 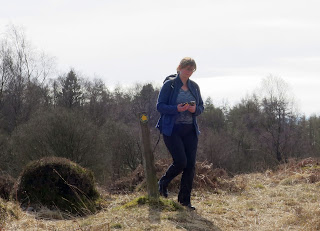 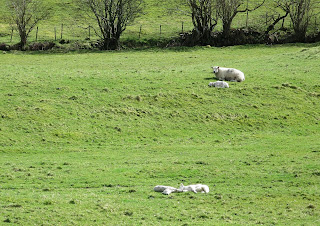 Last year we found a really remote, newly opened caravan site in Lowick Green.  At the time there were only two caravans on site, and when we drove past it in the afternoon there were still only two caravans there.  All that is stopping us joining them is being able to find a good quality caravan, no more than three or four years old, and green.  There are plenty of affordable caravans around, but none in green!

We drowned our sorrows in the Rusland Pool hotel before heading back to the site, stopping off at Booths on the way.


After dinner in the caravan we were going to go to the nearby Strickland Arms pub, but it started to rain heavily so we had another night in.

A particularly good Archers to entertain us on the way home.  We realised half way that we had left the bird feeder behind, so we will have to invest in another one before out next trip, which won't be until May because we are going on holiday soon - a cruise mostly around Italy.

After the cruise we will probably try to go somewhere in Derbyshire, a break from the Cumbria.


So much for Spring.  Thoughts of barbecues and sitting outside the caravan were quickly set aside after a look at the weather forecast, which couldn't really have been any worse.


Having paid in full, and with no chance of a refund, we set off for Castlerigg Hall, determined to enjoy ourselves and hoping the weather wouldn't be as bad as they were predicting.

It was ok when we arrived on our pitch with a view... 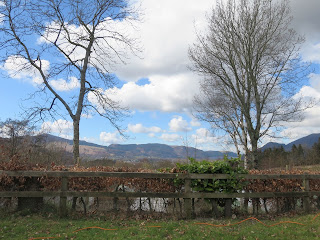 The blue sky was short lived, although it did remain nice for the remainder of the day. 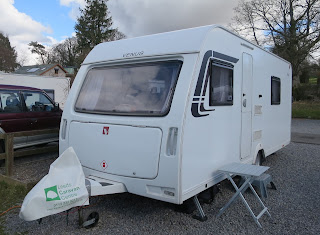 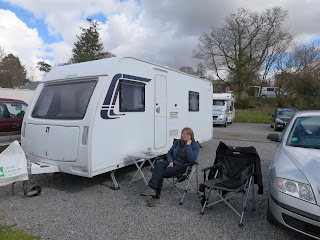 We managed to have lunch sitting outside the caravan, and then headed into Keswick.  The usual route down the hill was closed, due to a collapsed bridge, thanks to the recent floods, but we made it.  Had a quick look around the town, then dinner in a Mexican tapas restaurant, followed by drinks in a couple of pubs.  Scored 23/40 in a pub quiz, but at least we didn't come last!  Of course, we forgot to take torches, so had to walk back in the dark, first using a torch app on J's phone, then a bright picture on the camera to light the way.

It was only raining a bit when we woke up, so we decided to make the most of the morning.  We drove to Dodd forest, hoping to see ospreys from one of two viewing points. No chance.  The nest was pointed out to us by osprey watch volunteers but we didn't see any birds on it or in flight.  It was a murky day. 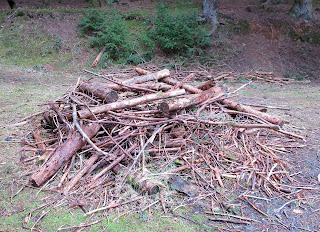 A replica of the osprey's nest

We did manage to get to the summit of Dodd, 502 metres, so another Wainwright ticked off. 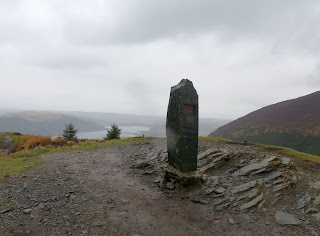 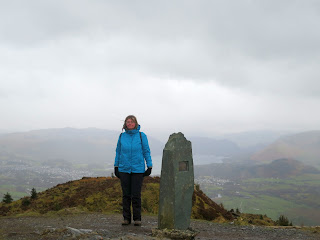 Stopped off at Booth's on the way back.  Badly affected by recent flooding, they had almost no frozen goods, but they did have nice beers and a bottle of Blackberry gin for J, which she had enjoyed in a pub the night before.

It started to rain heavily mid afternoon and it didn't stop.  Too wet to venture out, we spent the night in the caravan listening to the radio above the sound of the rain.

Light rain when we woke up.  We had planned to drive to nearby Grange, then get a bus to Honister slate mine and walk back to the car, but we thought better of it.  We'll save that walk for another day.

We still drove to Grange, but then did a low level circular wall to Derwentwater and back.  It rained most of the time, sometimes heavily, and we got soaked. 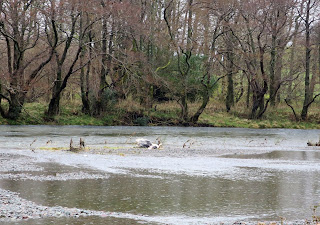 A dead sheep in the swollen river at Grange bridge 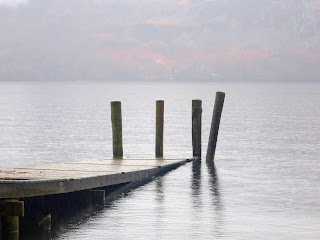 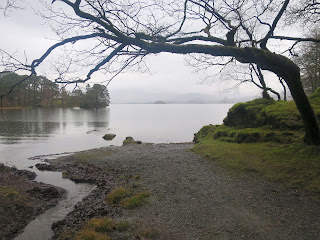 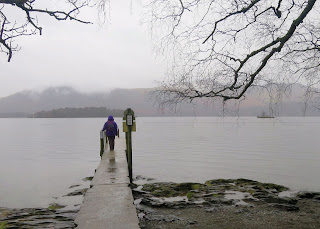 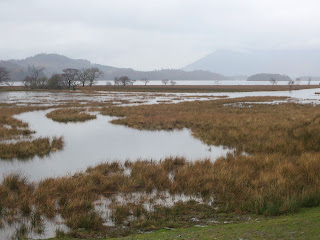 In the evening we had dinner in the onsite restaurant and then a drink in the nearby Heights hotel, a place we have enjoyed in the past but which was a bit lacking in atmosphere tonight.

Had a bit of a scare on the way home, when D noticed something flapping around in his door mirror.   We pulled into Lancaster services, but it was just the flap that covers the water inlet point, so no harm done.

Nothing booked, we are going on a cruise around Italy soon so it might be a while before we get back in the caravan.
Posted by Our Caravan Blog at 22:46 No comments:
Newer Posts Older Posts Home
Subscribe to: Posts (Atom)