Second visit to this site. In a large wooded area just outside Ambleside. Uneventful journey - getting used to the extra weight now,  like the stabiliser lots! 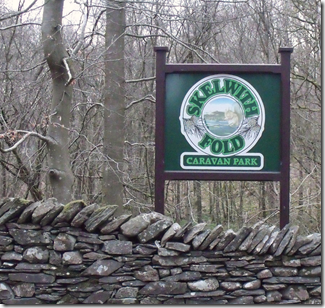 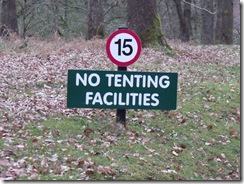 No riff raff here (we used to be the riff raff!)

Very poor reversing this time. No grass strip as a guide.  Tried to get into pitch no. 56 but ended up in 55.  The whole area looked a bit like a car park anyway so didn't really matter. Two window stays decided to give up as soon as we opened them - Something else to add to the fix list.

Quick walk around site.  Found really nice vacant pitch for a static caravan, no immediate neighbours and on a hill…one day…!

After a cup of tea and some sausage rolls, we walked to Skelwith Bridge and had tea and cake by the river, followed by a pint (Langdale Tup) in the Talbot bar.  Nobody else in the pub, which is how we like it!  Good chill-out music.

BBQ in the evening.  Fed up with burgers and sausages so before we left home J prepared lemon chicken and lamb skewers - yummy.  Laid off the beer tonight – had wine instead!  Nobody else having a BBQ…are they no longer fashionable?  Walked to site entrance to get a photo and saw a deer on the way back.  Too dark to get a photo of it.

Went to the on site library.  All the books donated by fellow campers and a great choice.  It’s not supervised so they expect you to be honest and take it back.  J found a paperback she liked but couldn’t read it all in one weekend so took it home.  In our defence we did donate a large bag of books ourselves!

Was great not having to make the bed up.  Purchased a made to measure foam mattress from efoam which fits like a dream.  It’s very firm and smells a bit funny, but good for the back, and just needs a bit of an airing. 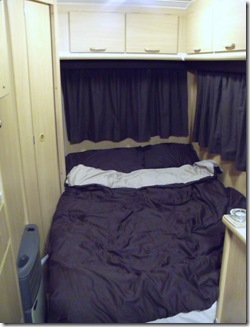 Bit of a squeeze to the bathroom !

Woke early so D popped to the site shop to get a danish pastry but hadn’t opened yet.  A fellow caravanner was hanging around too and gave him a lift back.  D didn’t want to take him out of his way so asked to be dropped off at the toilets which probably sounded worse!

Off to climb Wetherlam, near Coniston, at 9am.  It’s peak is 763 metres (2502 ft)   Got out of the car to be greeted by a flock of sheep being chased by a sheepdog, followed by the farmer on a quad bike shouting obscenities at it. The poor dog did it’s best and only two sheep escaped over the wall.  The farmer went after them, probably thinking ‘if you want something doing…’

At the start we came to some disused quarries and a dead sheep blocking a bridge.  Bear Grylls would have skinned it, eaten it, and wore the fleece, but we just prodded it and edged around it. 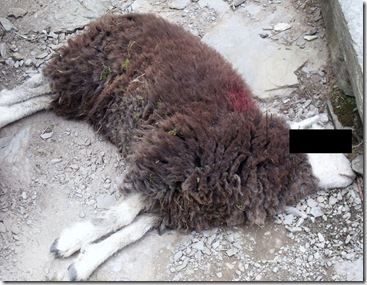 Good walk, a bit steep in places with some easy scrambling.  A bit hazy so not a good day for photos. Lunch at the top. Nice and easy on the way down, no problems with the knees this time.  Five miles in five hours, not very quick today!  Weather was warm, but think we were a bit optimistic putting on F50+ sun cream. 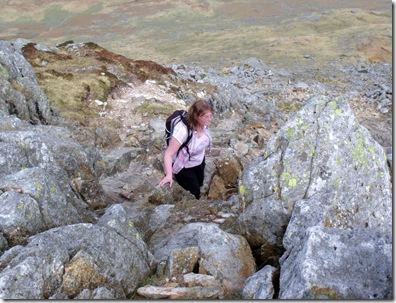 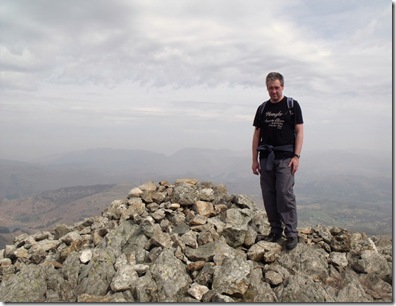 Back to base by 4pm.  A few beers by the caravan,  microwave meals (quite tasty) and a stroll down to Skelwith Bridge again, for more beer.  Then back to caravan for…beer!  Lots of drinking today.

Just about to go to bed when we discovered a problem with the sink…water not draining away and dripped all over the shower tray.  Nothing a bit of Mr Muscle can’t fix.

A bit of a lie in, so shop was open for business this time.  No sign of a lift so had to walk back!  Poured down while we were packing up but cheered up once on the motorway.  Uneventful journey home.

Posted by Our Caravan Blog at 11:03 No comments:

First trip out in the new van.  More of a fact finding mission than a short break! 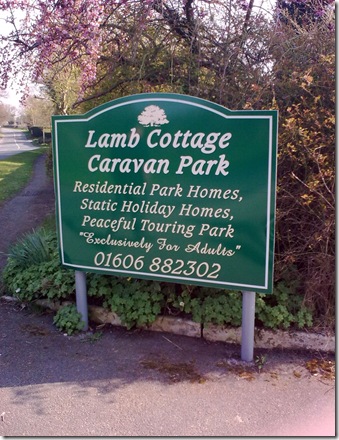 Took just 40 minutes to get to Lamb Cottage Caravan Park in Whitegate near Northwich, Cheshire.  We wouldn’t normally stay here as Northwich is near enough for us to visit for the day.  A really peaceful site with friendly staff and a cute resident cat!   Strictly adults only – even visitors have to be over 18.

The toilet / shower block is spotless, and has separate en-suite bathrooms which were almost, always empty even though the site was full.

Took a lot longer than usual to set up.  Thought there was a problem with the water pump, but we forgot to switch it on at the main socket. No dust cover for the water container so popped to the caravan shop down the road to buy one.  Not as good quality as the one that is usually supplied with the pump but it’ll do the job. Everything else seems to be working fine.

Had a barbecue in the evening as the weather was very mild.  Made up some kebabs which would have been tastier if J hadn’t knocked the bowl of Chinese seasoning into the the washing up water. We were the only ones outside, everyone else cooped up in their caravans watching tv – miserable lot! Drunk three glasses of wine very quickly due to forgetting to bring the table. 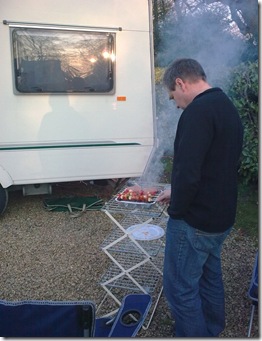 Walked about a mile to the nearest pub, The Plough Inn. Very busy so had a drink outside, then another after the restaurant emptied out. Booked a table for dinner for the following evening but wasn’t happy about the price of food (over £10 for a salad!)

Back to the caravan to try out the bed.  That night we were at the back of the van.  D was in charge of putting it up but kneeled on the wooden slats before he put the cushions down – a loud crack was heard so out came the toolbox! 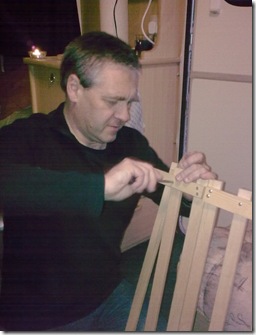 Didn’t sleep too badly but the cushions were a bit thin and we were very close to the bathroom door.  Hopefully tomorrow night might be better when we try out the front. 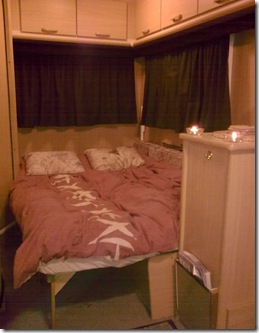 Note the curtains hurriedly made by J to replace the original ones.  Didn’t notice the dry clean only symbol until they  were hung out to dry.  Not a great job but they’ll have to do for now!

Woke a bit later than planned and set off for the Sandstone Trail.  This was a circular route around Beeston Castle about 7 miles long, all on flat ground. A very pleasant walk mostly along lanes, fields and The Shropshire Union Canal.  Weather was very hot and no hat or sun cream! Just before the end we stopped at the Shady Oak pub alongside the canal for a sandwich and the tastiest chips we have ever eaten! 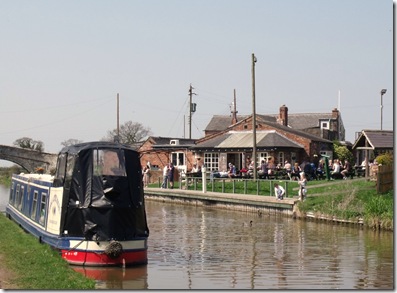 The Shady Oak in Tarporley

Got back early afternoon as J’s mum and her partner were coming to see the caravan. They brought some delicious homemade date and walnut cake, but as we only had 2 cups (we never have visitors) we had to sacrifice the tea to wash it down! Had a wander around the site looking at the very expensive static caravans, then just down the road to Blakemere craft centre.  Had a 2 for £10 meal at the restaurant there, which was great value for money, then back for a Cornetto bought earlier from the ice cream man that visited the site.

Stayed in the caravan that evening. We were a bit tired and sunburned to do much else and didn’t dare go back to the pub as we had forgotten to cancel the table reservation.  Converted the front seating area to the bed.  This was narrower than the back bit as the window slopes at the front hemming you in a bit, but the cushions are much thicker.

Have concluded that we will get a piece of firm foam cut to replace the back seats and keep the bed permanently made up.  The front is more comfortable to sit on anyway.  The only downside is its a bit of a tight squeeze to get into the bathroom but we rarely use it anyway, preferring to use the sites facilities.

Now the water heater has stopped working, but a bit of research on the internet suggested we had the thermostat set too high so it cuts out.  Fingers crossed it’ll be okay next time or it’s a 3 hour round trip to take it back to be fixed!

All in all, a successful trip – thought it would be like the first trip with the previous van when nothing worked and we spent the whole weekend shouting at each other!

Posted by Our Caravan Blog at 13:41 No comments: 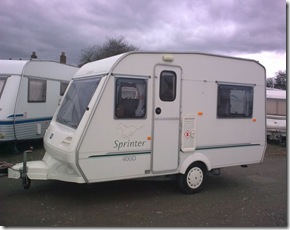 Took charge today of the Abi Sprinter 400D.   We were given a detailed tour around the van but have yet to try the fridge, heater and water pump – the most important things!  We were assured everything was tested and it’s under warranty so should be fine.  If not, it’s a long drive back to complain! Everything went well with the part exchange, they seemed pleased enough with our old van.  Thought the absence of an A frame would be a problem but it wasn’t mentioned.  D nervous about narrow lanes and road works on the M60 but not much traffic especially for a Bank Holiday Monday.  Also was a bit windy but the stabiliser did what it was supposed to do.

Once back at the storage site the curtains came straight down to be replaced – a sort of orangey pink and not very attractive! One of the front reflectors fell off on the way back but a quick eBay search found a replacement.  D pleased with the stabiliser but has discovered the security lock for it will cost between £50-£90. He’s thinking of a small chain and padlock feature instead! Nice to have an ’A’ frame too, looks much tidier and somewhere to store leads neatly away.  Carpet is okay, but will get a nice runner to cheer it up a bit – something to co-ordinate with the curtains I’m going to have a go at making!

Put the bed together and its about 2 foot narrower at 4ft so will be very cosy indeed! Not decided yet what end to sleep at.

All in all a nice van, much more room inside but no more difficult to tow. 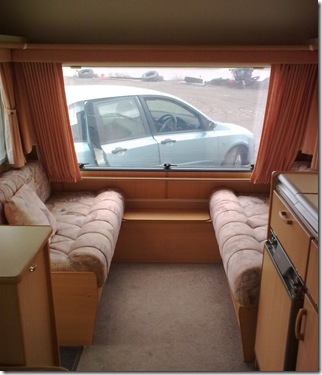 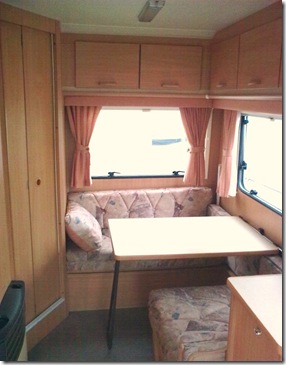 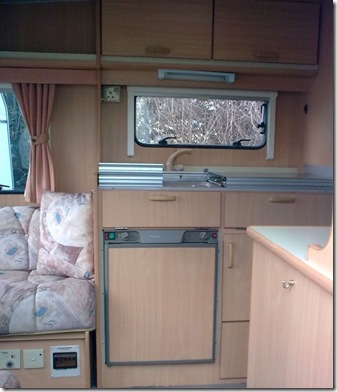