Our first trip after paying £395 for a running gear only service, and our first trip of the year to Wales.  To Porthmadog, to be exact, and a new site for us…Tyddn Llwyn. Nearly a very good site, but (we think) not quite up to CC or C&CC standards.  There is a review at the end of this post.

D off work this week, hence the Thursday start.  We arrived after an uneventful journey and were allocated pitch number 19.  Unfortunately we got a bit lost looking for it and D had to reverse about 100 yards after taking a wrong turn.  Luckily there was a friendly warden on hand to help…and laugh! 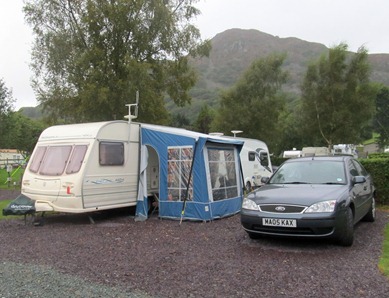 Not a particularly nice day weather wise and it was raining a bit when we set off for the nearby village of Borth-y-Gest. 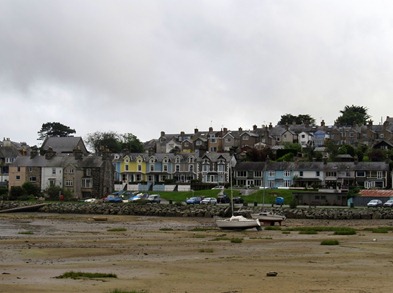 Not much to do there, so we walked into Porthmadog and ended up having a meal in the Ship Inn and staying for their pub quiz.  27/50 wasn’t anywhere near enough to win, but we did win a box of Quality Street in the raffle.  Good selection of not local beers.  The Royal Sportsman is nice too, but very expensive food!

Not a very promising weather forecast, so no walk planned for today.  Instead a stroll along the beach. 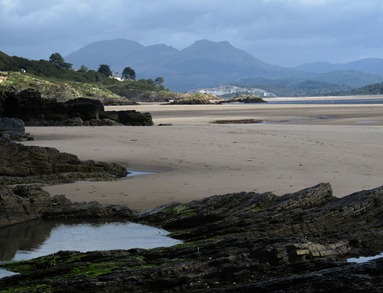 There are some nice beaches around here and the pic above is typical.  When the path headed inland we decided to walk along the beach instead and had to wade through pools of water before getting to one that was just a bit too deep and we had to retrace our steps. 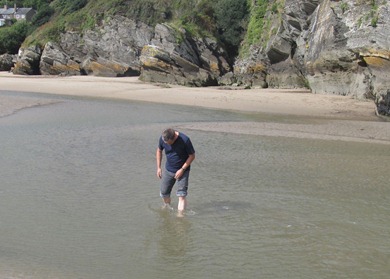 This one wasn’t too deep. 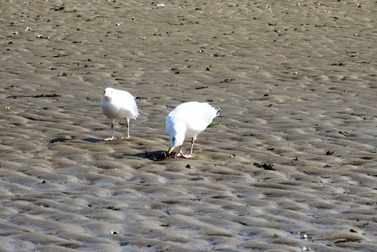 It turned out to be quite a hot day with plenty of sunshine, albeit a bit windy.

In the afternoon we drove to Criccieth. 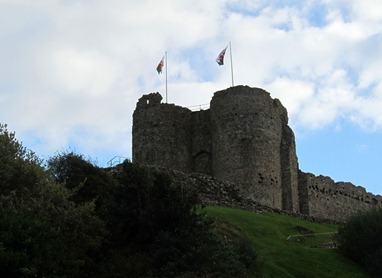 The on site bar promised a selection of real ales, so we decided to give it a go.  In reality there was only one, Welsh Pale Ale, which was okay, but the atmosphere was typical of an on site bar and we didn’t hang around.  The people next door stayed up chatting loudly until well past midnight, but worse was to come!

A slightly better weather forecast for today, which turned out to be wrong…again!  The plan was to go for  a walk around Blaenau Ffestiniog but when we got there it was very grey and overcast and the hills looked dark and menacing, so, wimps that we are, we decided to give it a miss.

Instead we drove on to Barmouth, which is a really nice seaside town.  Obviously it’s much nicer in fine weather, but we had a look around and D bought a couple of books from a second-hand book shop and J bought an incense holder. 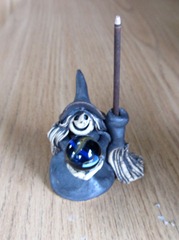 On the way back we stopped off in Porthmadog and had a wander around the shops there.  D bought a couple of jazz CDs from a second-hand record shop to listen to later.

Moel-y-Gest is a small hill that is accessible from the site.  Only 270 metres, a round trip of about 2 miles, and this was to be the only walking this weekend. 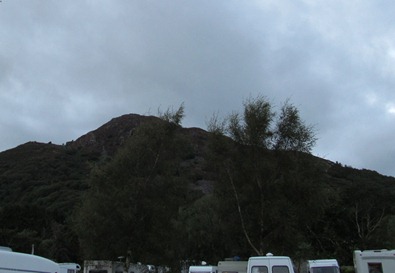 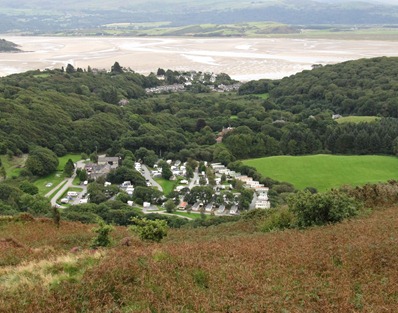 A short, steep climb to the summit, but the reward was excellent views of Cardigan bay.  Spent a while looking for, but not finding, a geocache halfway up! 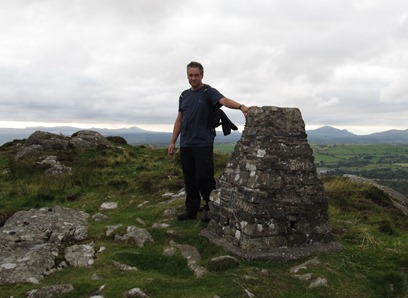 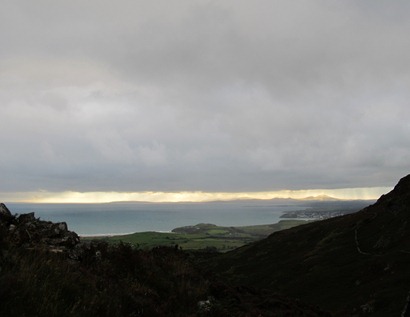 There are more pics in the gallery.

The plan for tonight was a quiet night in, but our neighbours had other ideas, and all we could hear until about 10.30 was the sound of their TV which they had brought out into their awning.  Some people might call us killjoys, but it was really loud.  We couldn’t hear our music above it.  J phoned the site number to complain but there was no reply so we just put up with it and turned our music up a bit.  Some people have no consideration for others and are just plain ignorant.  We have never had noise issues at CC or C&CC sites, so maybe we will stick to them in future.  Rant over.

Got up early to put the awning away and it was just as well we did because it started to rain just as we finished.  Our neighbours weren’t so lucky and we enjoyed watching them struggling in the rain…ha ha.

This is nearly a very good site, but there a few niggling complaints.

Location wise, it’s very handy for Porthmadog and some nice local beaches, and the hill that overlooks it is well worth a climb.  There are some reasonable pubs in Porthmadog and it is only about 3/4 of a mile.  The on site bar and restaurant is ok, just not our thing.

Pitches are a good size but some are a bit close together.

There are three toilet blocks, one of which is new and very well decorated.  The other one we used was clean enough but a bit dark and dingy compared to the new one.  50p for showers is quite unusual these days, but we never ran out of hot water.  Despite having to pay, you still have to push a button every ten seconds or so, which is a bit annoying.  In one of the showers in the new block you had to press it every three seconds!  Same in some of the wash basins.  The lighting is motion sensitive and whilst in the shower most of the lights went off.  There was still enough light for a shower but…why?  Very green, I’m sure, just not practical.

No rubbish bins on site, just a large skip near the entrance.  The only reason I can think of for this is that they don’t want to empty the bins themselves!

I know we shouldn’t blame the site, but our problem with noisy neighbours has to go against it too.

We would return to this site if we want to visit this area again, but the search for a really nice site in Wales continues.

Our second visit of the year to the C&CC site at Ravenglass, Cumbria…still D’s favourite site.

Posted by Our Caravan Blog at 18:24 No comments:

The last day of summer 2012 (what summer, I hear you cry?) finds us in Castleton, Derbyshire.

We arrived around 2pm to find the site quite full, probably of people left over from the bank holiday, so not many pitches to choose from.  The one we ended up in was not great as it had a path right next to it, so not much privacy this weekend!

Set everything up, including the awning, and then strolled into Castleton to have a look around and sample the local ales, of which there are plenty.  No fewer than six pubs to choose from!

We popped back to the caravan for dinner and then returned to Ye Olde Nags Head for their Friday night pub quiz.  We didn’t come close to winning but did okay…34/50.  We were reminiscing about the first time we came here and free food kept coming round, when all of a sudden, the barmaid appeared with a tray of sandwiches, then came back again with hot sausage rolls and chips, hurrah!

It was overcast when we woke up so we didn’t rush to get out.  The forecast was for an improving day and it was spot on.

The objective was Kinder Low (633 metres) from Upper Booth, via Jacob’s Ladder, but when we arrived at Upper Booth there was nowhere to park so we had to start from Edale instead.  This added a couple of miles to the walk, making it about 8 in total. 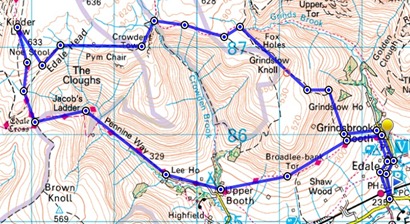 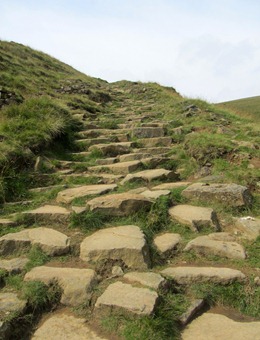 We made it to the summit. 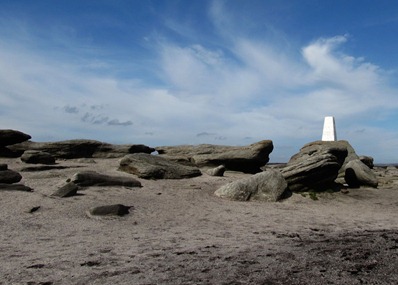 Got chatting to a family with a couple of small dogs about the merits of handheld GPS’s after they saw us playing with ours.  One of the dogs got left behind when they left and we saw it running round in circles looking for them, so D marched off in the direction they had gone while J tried to grab it.  Luckily they came running back and Cracker was reunited with them.

We set off in a different direction, heading for the Woolpacks and Crowden Tower before returning to Edale.  Lots of interesting rock formations here.  More pics in the gallery. 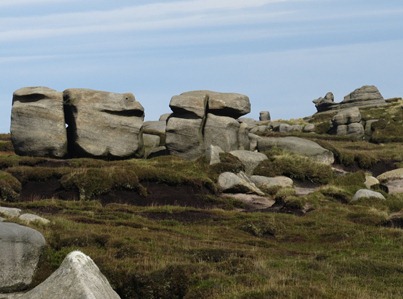 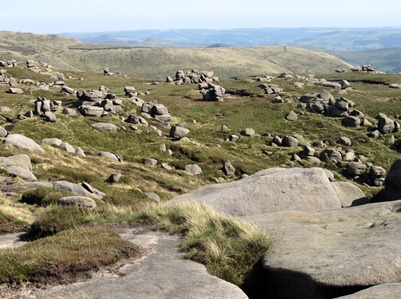 Popped into a pub in Edale before heading back to the site for a barbecue and an evening in and around the caravan. 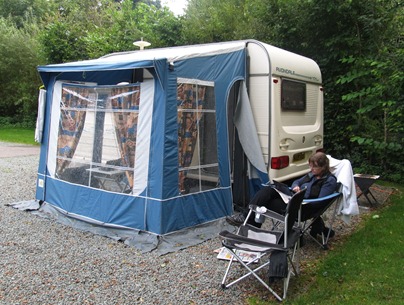 Awoke very early to the sound of drip, drip, drip, drip….!  The sound of water dripping from the front of the awning onto the storm flaps.  Storm flaps in or out? that is the question.  We always have them out, but probably wont in future! 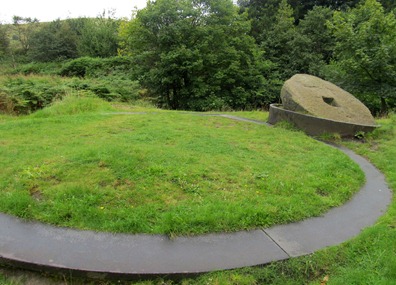 The circle is made of metal and was very slippery.  J slipped and fell but no pic or video record of it and luckily a soft landing.

We dropped off our first trackable travelbug here…Kitty Tag.  We should be able to track it as it gets moved from cache to cache around the country. 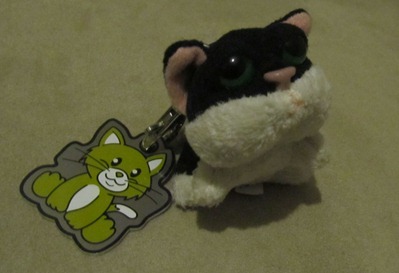 Dinner at The Castle Inn…a very reasonable two courses for £9.95.

In the evening we went to the Cheshire Cheese Inn for their weekly pub quiz and couldn’t believe it when the quizmaster started reading out exactly the same questions we had had on Friday!  We started fretting about how we were going to drink the gallon of ale first prize in the hour or so before last orders, but we needn’t have bothered.  We only managed 18/20, as we forgot 2 of the answers, and there was an element of luck involved because it was Blockbusters style and you had to get the right answer in the right order.  We didn’t win the bingo either, or the picture round, or the best team name competition!

Left early and noticed an annoying bump from the caravan when braking or slowing down.  A quick look on google suggest it is the damper in the tow hitch, but it’s booked in for a running gear service later in the week.  Hopefully nothing too expensive or the search for a new caravan will start up again.

Lots of beer got drunk this weekend, so…

Just as well we didn’t win the gallon of ale!

Despite D being off work for a week soon, nothing booked.  It depends on the results of the service I guess.