So what was wrong with the Abi?  Nothing really, but the layout just wasn’t working for us.  The bed at 3ft 9ins wide (!) was far too small and having it made up all the time meant sacrificing lots of space, to the extent that we probably had less walking around space than in the first caravan, the Abi Sprinter 350/2 (which is for sale again, with the same dealer that took it off us for not much more than we paid for it…D very tempted to buy it back)

So why an Avondale Dart 440/4?  We weren’t looking for this model (we were actually looking for a Lunar Chateau 400 with a view to having the front bed made up all the time) but it kind of jumped out at us, and having to make the bed up every night isn’t such a big deal…..is it?

It’s in really good condition for its age.  Interesting layout with an L shaped lounge and separate dining area, bigger bathroom, blown air heating and it’s unique selling point…a fly screen for the door!  Easily pleased, aren’t we?  Generally a more upmarket interior than the Sprinter.  Still no door bin though, we would love one of those! 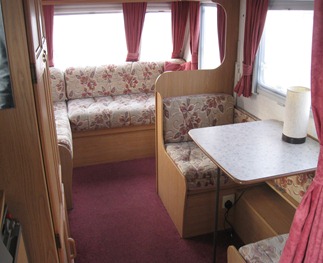 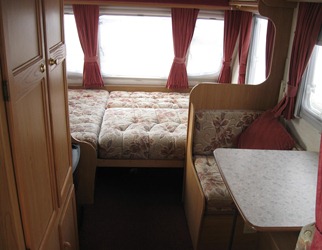 With the bed made up - still room to move about 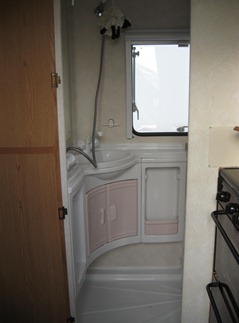 Bigger bathroom with a nice curtain to hide the loo! 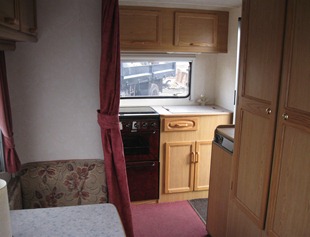 We now have a combi oven/grill but the bottom door is just a pan cupboard, and the microwave won’t fit in there –  we now have to actually cook things instead of reheating ready meals.

Haven’t actually towed it yet, the dealer we part exchanged with was so keen to take our money he offered to drive 70 miles to deliver it (in his newish Range Rover he paid cash for)  and even swapped our stabiliser over instead of keeping it on the old van. The second hand caravan business is booming apparently - I wish I was a dealer! He had his teenage daughter with him who did all the dirty jobs without a word of complaint…where can we get one of those from?!

It’s a bit heavier than the Abi but on paper it can be towed with ease by our soon to be replaced Fiat Stilo 1.9 JTD, and fully loaded it is less than 85% of the weight of the car.

Oh well, we are stuck with it now and it will have to last until at least next year’s bonus!!

It’s off to Castlerigg Hall, Keswick next time, for three nights – a birthday treat for D!