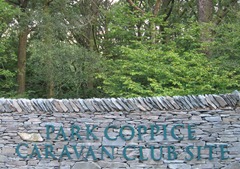 Three days instead of the usual two, Park Coppice one of our favourite sites, the area around Coniston one of our preferred locations in Cumbria…we were looking forward to a great weekend…until we checked the weather forecast!

Arrived around 2pm only to be informed that our favourite part of the site was closed because the site wasn’t very full.  No problem we thought, it’s a massive site and there are loads of pitches to choose from.  Too much choice, in fact, as we drove around aimlessly, looking for the perfect pitch.  After much arguing we settled for one just about as far away from the facilities as it is possible to get!  Of course, being in a forest, the pitches tend to slope a bit.  Our first choice was so bad that we moved to the neighbouring one, but still had to have the front of the van as low down as it would possibly go.

We were intending to put up the awning this weekend, but discovered that a clamp on one of the poles was broken, so much for that idea! 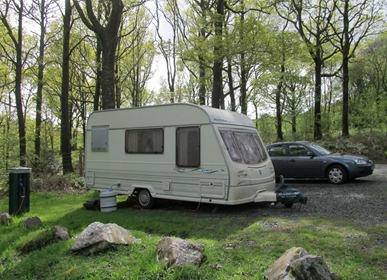 After setting everything up we strolled into Coniston.  There are four pubs in the centre and all are really nice.  Our favourite from our last visit was The Sun Hotel, so we started there.  TC, the pub cat, put in an appearance but wasn’t very friendly!

Then we decamped to The Black Bull Inn and had a very nice meal, then on to The Crown Inn.

According to the weather forecast, the best day of the weekend, so we headed into the hills to the west of Coniston, the main objective being Caw, 500 metres. 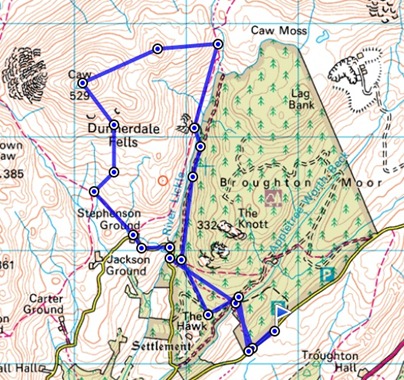 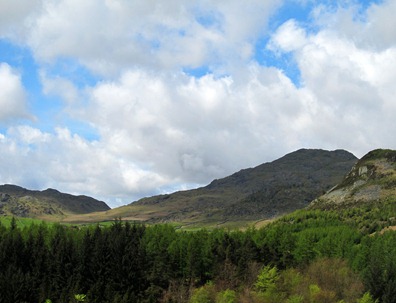 Caw in the distance…a long way still to go!

Regular readers will know that we are borderline sheep fetishists and often include pictures of cute sheep and lambs that we encounter on our travels.  But we wouldn’t like to meet these two without a fence between us… 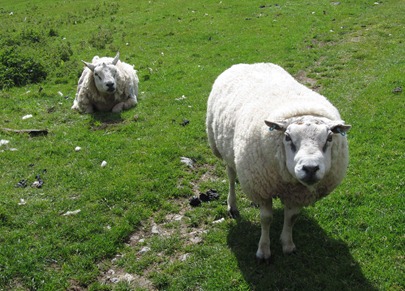 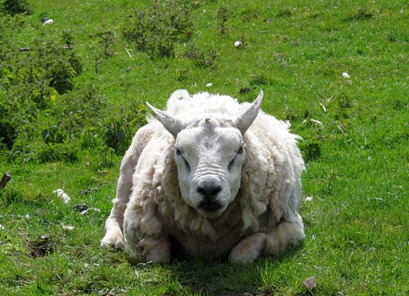 There aren’t any footpaths to the summit of Caw on our (probably out of date) OS map, so we had to find our own way up it.  We decided to follow Broadslack Beck and even traced it to it’s source… 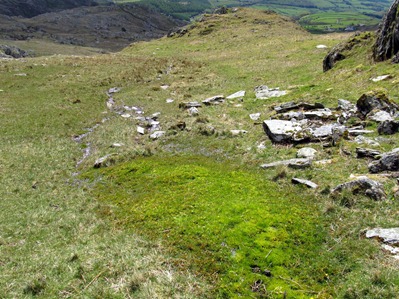 The source of Broadslack Beck

…and then scrambled up to the summit.  It was a bit of a slog walking up wet grass but we made it 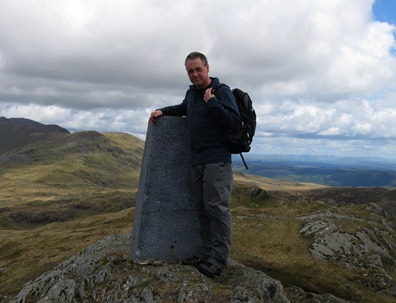 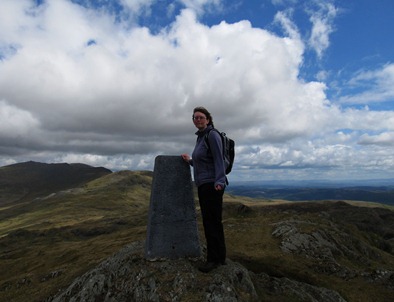 There are more pics in the gallery, but here is D’s favourite pic of the day… 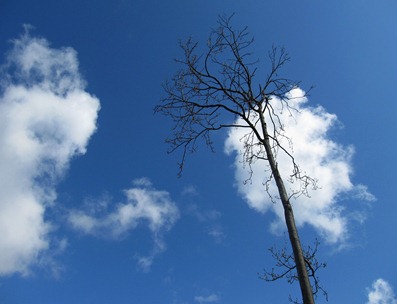 D slipped on wet grass on the way down and landed on his shoulder, but thankfully nothing broken, just a slight sprain and a very wet behind!

Stopped off at Coniston on the way back for supplies as the weather was keeping dry, and we decided to chance having a barbecue.

We do seem to be having trouble lighting these lately, and this weekend was no exception, even with 4 lighting cubes and a generous squirt of  bbq fluid.  D gave up and retreated inside the caravan, but J didn’t, and lovingly coaxed it back to life. We managed to produce some burgers and sausages so didn't go hungry after all.

Stayed in the caravan in the evening, praying we wouldn't end up with food poisoning!

Park Coppice is a great site but radio reception is very poor and we couldn’t get any DAB or FM stations.  Luckily we had some cd’s in the car.

Awoke to reasonable weather and after a leisurely breakfast we drove to Ambleside and had a wander around.  We stumbled upon Sheila's Cottage – a tearoom tucked away down a quiet lane.  Enjoyed cake, scones and some really nice large leaf Ceylon tea.   This is supplied by John Farrer's of Kendal,  and J now wants to buy some, and also a nice teapot!

On the way back we decided to call into one of D’s favourite pubs, The Drunken Duck Inn.  We sat inside as the weather was pretty cold, but it wasn’t the same - one of his highlights of last year was sitting outside under the canopy,  looking at the view as it poured down with rain!

Then we stopped at Coniston on the way back.  D thought he might watch the football but we ended up in the (empty) Yewdale Hotel instead.  Probably empty due to the lack of a TV.  Very exciting it would have been, had they had one.

The plan for the evening was to walk to The Church House Inn, Torver, for dinner and stay for their Sunday night pub quiz.  The walking bit didn’t happen because it started to rain quite heavily, so we drove instead.  This meant that we couldn’t drink much, which was probably a good thing!

Only four teams and we came third, so could have been worse! 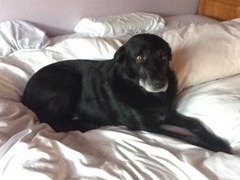 Struggled to get to sleep later, as the rain continued throughout the night and the wind howled.  And D’s shoulder was still aching.

Here are some more pics…

A return to Hawes, Yorkshire.