We like to try a new site every now and then, and we have been meaning to try the Buxton Caravan Club site for a while now.  We booked it a twice last year, but had to cancel both times, once because of the weather and once for some other reason which eludes us! 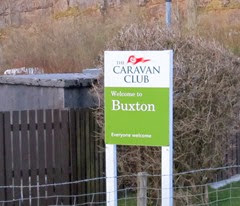 A typical Caravan Club site, with massive hard standing pitches and excellent facilities, and not too far from Buxton town centre, albeit a bit of an uphill slog on the way back.

A Sunday start, due to work getting in the way of life!  We arrived early and were soon tucking into lunch and a cup of tea, outside the caravan for a change. 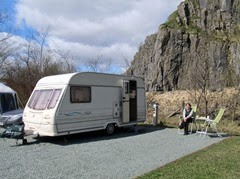 After lunch we headed up into the hills around the site and visited Solomon’s Temple, which has excellent views of the surrounding countryside and the town of Buxton.  Quite a popular spot, so we didn’t have it to ourselves.

Solomon’s Temple, also known as Grinlow Tower, is a Victorian Fortified hill marker near the spa town of Buxton in the Derbyshire Peak District.  It is said to have been built by Solomon Mycock in the 1890s, paid for by public subscription to provide work for the locally unemployed with assistance of the seventh Duke of Devonshire. The tower was restored in 1998 by public subscription.  The structure is a 20-foot-high, two-storey tower built on top of a Bronze Age barrow, sitting on top of a ridge at a height of 440 metres (1,440 ft) above sea level. From the open top of the tower there are good views over the town and the surrounding countryside and parts of the Peak District. The tower does not contain anything other than the staircase to the top. 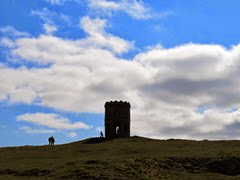 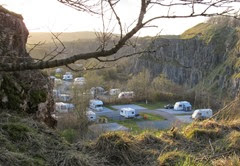 View of the site from near Solomon’s Temple

Then we descended into Buxton and had a cup of tea in the park and listened to a brass band.  Didn’t get charged for the cakes we had with our tea…hurrah.

Afterwards we went to the Buxton Brewery Tap Room and sampled some of their beers (D’s favourite was Buxton Spa).  We had dinner there, too, before the long, mostly uphill, walk back to the site.  Quite a windy night!

Much less windy today, in fact a really nice day for a gentle stroll through Wolfscote and Biggin Dales, starting and ending in Hartington.  About 6 miles in total. 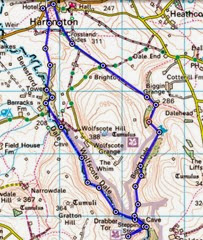 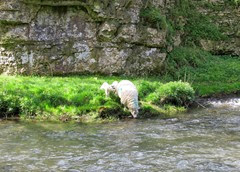 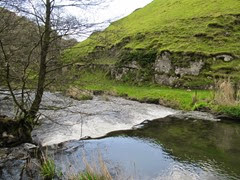 More pics in the gallery, including the usual cute lamb pics we always take around this time of year.

As on our last trip, we toyed with the idea of having a barbecue, stopping of at a supermarket on the way back and buying burgers and sausages before deciding it was too cold.  Partly because we were shaded from the sun by the caravan, partly because of the wind.  Anyway, the result was another indoor barbecue!

In the evening we walked up to Solomon’s Temple and enjoyed the sunset.  We almost had the place to ourselves this time. 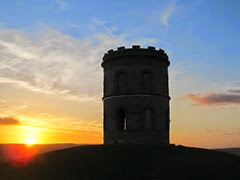 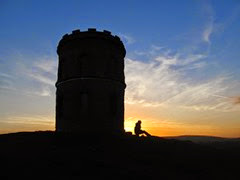 A bit of a disaster on the way home!  We forgot to pack the microwave away and it fell off the shelf above the fridge in transit, resulting in lots of broken glass from it’s shattered door.  Luckily no damage to the caravan, but we will have to invest in a new microwave before our next trip.

Justine, have you ever come across the Breathing Mobile Washer? It's a great caravaner's companion - it literally plunges through laundry in minutes with no electricity or running water required.

It sells in over 22 countries and is just breaking into the UK market. Dealers and supplies stores are being targeted to hold stock.

Should you be interested in viewing a demo of it, simply visit: www.mobile-washer.co.uk