The Not So Quiet Site!

We have been meaning to go to the Quiet Site, Ullswater, for a long time.  Good reviews and a quaint looking bar.  Being called The Quiet Site - expectations were high.

After a very uneventful drive, we arrived and were greeted by a cute cat outside reception…usually a good sign.

First disappointment was the pitch.  A bit of grass this time, but surrounded by statics (which seemed to be looking down on us).  Not very level either, so back to reception to borrow some wooden blocks!

On the way back we noticed a second pitching area further up the hill.  Nice pitches, no statics and views of the surrounding countryside.  Uncharacteristically brave, D headed back to reception to ask if we could change pitches, but the answer was a firm  no…all booked.  D checked later and they were still empty…hmmm!  Back to the worst pitch on the site – on a corner right  next to the facilities, so everyone tramped across our bit of grass.  Kept hoping someone would trip over the hook up lead but alas..!!

Next disappointment for D was the toilet block.  Recently refurbished but oh so cramped.  For J it was the bathroom…full of spiders and not very clean.

Yet again the water pump played up, but after taking it apart and looking like he knew what he was doing, D got it working again for the rest of the weekend.

Not a good start, so we decided to walk down the hill about a mile and a half to the Brackenrigg Inn for a pint or three.  D very impressed with the view and the Loweswater Gold, so spirits lifted! 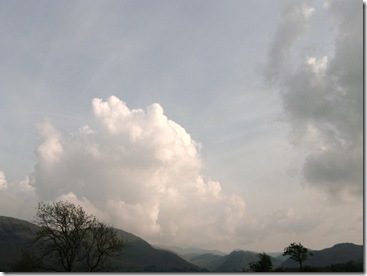 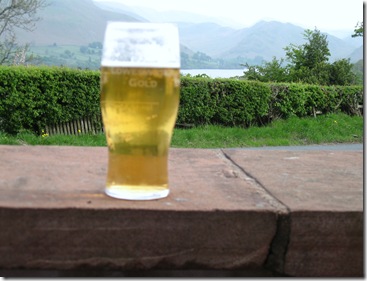 The walk down the hill was very pleasant, but what goes down must go up so it was a bit of a slog getting back!

After a BBQ we decided to try the onsite bar, only to be greeted by…a roaring log fire…on the hottest day of the year so far!  Oh dear.  That, and the sound of screaming kids in a soft play area upstairs sent us back to the van with our tails between our legs.

We chose this site as the website promised it would live up to it’s name, but it’s completely geared towards young  families.  The pub is more of an entertainment complex - if we wanted a Haven holiday we would have gone on one!  I don’t think we have ever been more disappointed with a site (except for one on a working farm in Wales which we had to leave after one miserable night!)

Woke early to the sounds of the family next door playing guitar – very badly!

No major expedition planned this time, just a stroll around Haweswater reservoir in the afternoon.

But first a trip to Penrith to get hats…sunstroke a very real possibility today!  J got a nice brown one.  Factor 50 suntan lotion ensured that no exposed bits got burnt! 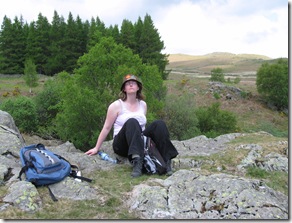 We have been to Haweswater many times, but this time we decided to start at the other end – Burnbanks.  A collection of cottages built to house the workers who built the reservoir, and a very nice place to live we think.

A pleasant walk with lots of rests due to the heat, and as is becoming normal these days an encounter with the remains of a sheep! 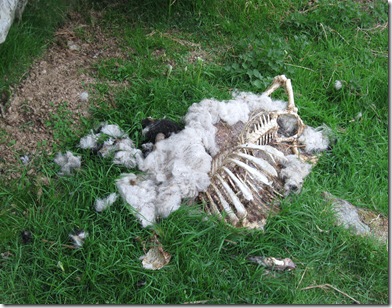 Unimpressed with the onsite bar, it was back to the Brackenrigg Inn in the evening for more Loweswater Gold.  Weather still very mild so sat outside.

On the way back in semi darkness, we came across a stray cow in the road who seemed to be more drunk than us!  Forgot the torches but J found a credit card sized one that the RAC sent to try and get us to join – there was more light coming out of the cow’s eyes! 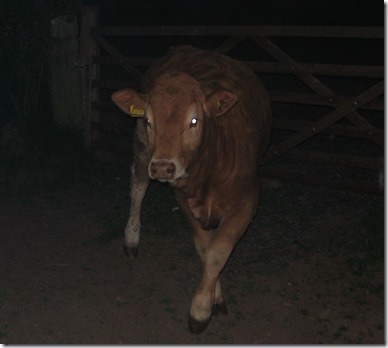 An early start. No point hanging around!

A bit of a panic back at the caravan storage place because all the pitches had been rearranged!

As you can imagine, we probably wont return to this site!

Coming soon…three nights in a massive, midge infested (according to reviews) forest site in Wales on the busiest bank holiday weekend of the year – must remember the insect repellent!!!

great blog, that cow looked like it was dancing!