No chance of D getting Friday off work, so for this weekend we chose somewhere easy to get to and close to home.  The C&CC site at Delamere Forest in Cheshire. 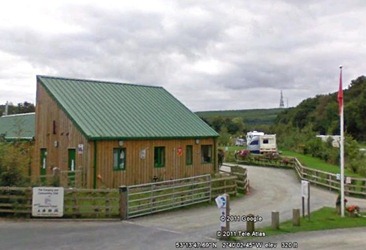 We came here when we first started caravanning, not long after the site opened, when everything was new and the bushes were just twigs sticking out of the ground.

After quickly replacing the leaky skylight before setting off, we arrived late afternoon and asked for a quiet pitch not too near the toilets.  Of course, we ended up in the furthest corner of the site, as far away from the toilets as it’s possible to get without leaving the site.  We don’t like being too close to the facilities but as the weekend wore on we started to have a rethink.

A nice man led us to our pitch and expertly directed D onto it.  So clear and precise were the instructions that D didn’t even have to look behind as the caravan eased it’s way effortlessly onto the pitch.  Now, if only J could do the same at other sites!  She normally just stands around looking bored, usually out of sight! 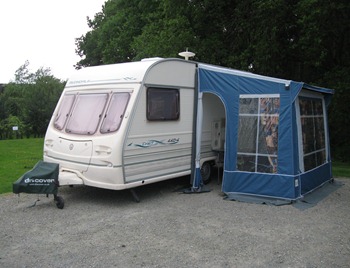 After the water pooling problems of last weekend we spent a long time putting the awning up this time!

No post set-up trip to a pub this weekend, instead a quick drive into Frodsham to get some cash, then back to the site in time to catch the mobile fish and chip van.

The site is right next to Delamere forest, so after dinner we walked through the trees to the nearest pub, just under a mile away, The Carriers Inn.  More of a restaurant than a pub, so we felt a bit out of place in jeans and trainers!  Not very nice beer, either!  Nice place for a meal, though.

Walked back through the forest in the dark, our way illuminated by our trusty three led windup torch.  A bit spooky for J (worried about badgers and goodness knows what else), but to D it felt safer than walking back from a pub on the estate where we live!

Visitors today.  Being close to home, J’s mother and her partner (let’s call them LR and DC) popped in to see us in the afternoon.  DC very keen on caravan life but not so keen on towing!  Lots of talk of hiring a motorhome later in the year, prompted by a visit to the nearby Discover caravan shop to look at very expensive motorhomes.

Then a short drive to The Shady Oak pub in Tiverton.  A really nice pub alongside a canal.  Too cold to sit outside, obviously, but a very nice lunch.

After saying farewell to our guests, we walked through the forest to a different pub, The Goshawk.  It took a bit longer than we thought, over an hour away.  Again, more of a restaurant than a pub but much better beer.

Homeward bound, listening to Debbie Harry’s choice of desert island discs.  Not at all what you would expect.

Hardly any pics this time, probably because it was too close to home and everything so familiar.

Coming soon…a weekend off, then three nights in Ravenglass (still D’s favourite site, although Park Coppice is not far behind).

PS…if you want to appear on TV with Paul Merton check out the comment on our Bala post.  We are far too timid, of course!

Excellent information, this knowledge is excellent and very important for everyone. I am heartily thankful to you for providing this kind of information. Thanks once again for sharing it. waterproof shade sails