Skelwith Fold is a great site for a static and not bad for tourers either.  We’ve been here a few times and the only real criticism is that there is no grass between pitches, so it’s a bit like a car park.  Only a very minor criticism though. 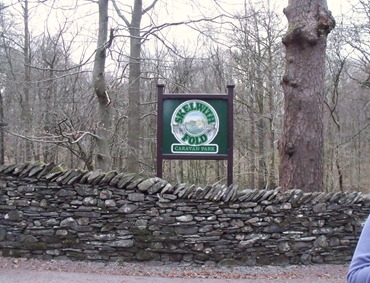 Only a two night stay and £3 a night extra meant no awning this time!  Not much setup needed, except we decided to try our status aerial for the first time this weekend.  First problem, wrong lead.  We needed one with a male connector at both ends but instead had two male-female ones.  Undaunted, D spent ages cobbling them together but to no avail…no signal.  We don’t know if it’s a defective aerial, the poor quality lead or just a poor reception area.  Will try again next time, but the older status aerials don’t get very good reviews so we are not holding out much hope! 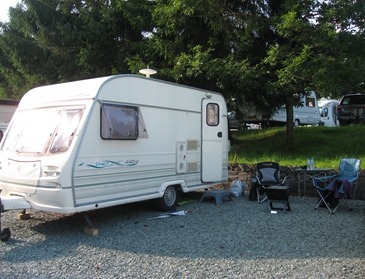 After much cursing, D finally gave up and we headed for the Drunken Duck Inn, just over a mile away, with rain clouds gathering.

This is a great pub to sit outside, with comfy wicker chairs and a canopy so that you can sit outside even if it is raining, which was just as well!  Good beer too, with Westmorland Gold from the on-site Barngates brewery winning the best beer of the weekend acolade. 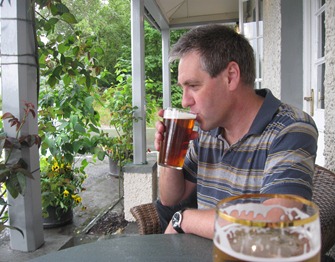 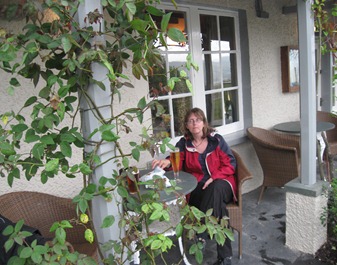 The view from the pub… 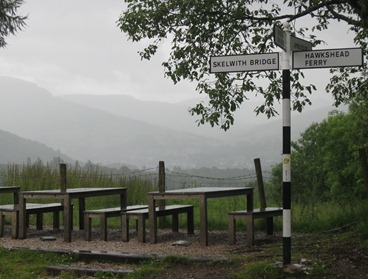 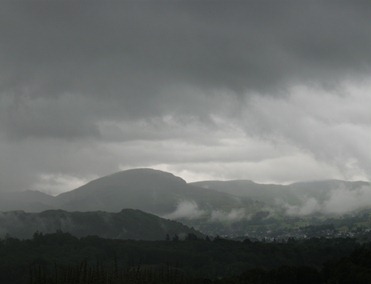 D really enjoyed sitting outside watching the rain.  A bit of thunder and lightning would have been the icing on the cake, but J was less keen as the temperature started to drop!

After a few drinks there was no sign of a break in the weather, so with no umbrella we jogged (yes jogged!) back to the site in the rain.  This knocked about 7 minutes off the time it took to walk there, but we still got back to the site soaked through.

A trip to the onsite laundrette was in order to dry off J’s walking trousers she needed for the next day.  While we were waiting, we had a browse in the library next door where visitors can swap books, and amongst the books were a couple of jigsaws.

Sitting inside a caravan, in the rain, listening to the radio, doing a jigsaw, life doesn’t get much better!  Actually a lot more enjoyable than it sounds. Didn’t realise it was one of those mystery ones though that doesn't show the picture on the box…this is going to take more than a weekend to complete!

The rain eased off overnight.

A bit of jigsaw-ing,  a couple of croissants then off to catch the bus to climb Helvellyn.  After a series of low level, easyish walks we thought it was time to tackle something a bit harder.  Helvellyn - Nethermost Pike - Dollywagon Pike, highpoint Helvellyn at 950 metres, distance about 7.5 miles.

We parked at Grasmere,  but as D was panicking about missing the bus,  we arrived at the stop 30 minutes early.  Got off at Swirls car park - the intention being to walk back to the car.  Started walking about 10am, still reeling from paying £4.40 each to travel a couple of stops!  If anybody from the Department for Transport is reading and wondering why more people don’t use buses more often…!

We’ve done Helvellyn before, but from the other side.  None of the excitement of Striding Edge this time, instead a steep, seemingly endless stepped path, like walking up stairs for an hour! 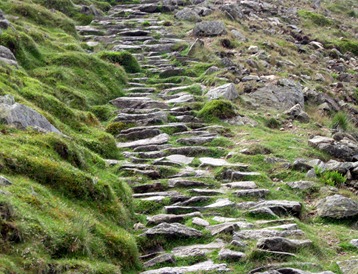 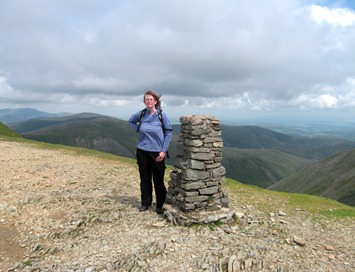 D really likes the summit of Helvellyn, a flat, open space with excellent views in all directions Next stop Nethermost Pike, then Dollywagon Pike, then a very long, steep descent back to Grasmere.  J likes the steps coming down, but D’s knees don’t.  The sun came back out with a vengeance and must have been at least 75 degrees. We had fleeces on at the top!

Eventually got to the Travellers Rest Inn for a most welcome pint.  J asked for a grapefruit juice and was presented with a packet of cheese and onion crisps by the barmaid!

Back at site we had another successful barbecue before returning to the jigsaw, determined to get it finished before we had to leave.

The jigsaw, the jigsaw, its like a black cloud hanging over us!  Did a bit more before we packed up, but no way were we going to dismantle it and take it back.  We managed to get the bits we had done back in the box and took it home.  We will return it when we visit next.  At least we left a couple of books in it’s place

There is supposed to be a pic of the jigsaw here, but it was very quickly disassembled by J!

We’ve been to Skelwith Fold a few times and haven’t really got anything bad to say about it.  After the lottery win, it will definitely be on our shortlist of sites for a static caravan.

But until the lottery win comes through, it’s carry on touring with our main caravan trip of the year next,  four nights at Park Coppice, Coniston, coming soon.

The Lake District is always a winner when it comes to camping. Is this a new touring site? I haven't come across this one before - looks owrthy of a visit. The drunken Duck pub - what a great name.

i dont think so know. we have been going for a few years now.