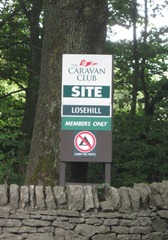 We really like this site.  We discovered it a few months ago and it instantly became one of our favourites.

Only downsides…a bit of road noise during the day and we couldn’t get anything on the radio.  TV reception is probably bad too, but we didn’t try.

You may recall from our earlier post that last time we came here we ended up spending loads on drink, and we were determined not to do the same again!  We weren’t entirely successful!

Arrived mid afternoon only to discover that we had forgotten to bring towels!  So off we dashed to Morrisons in Chapel-en-le-Frith about 6 miles away.

Back at site, we had a bit of trouble getting in.  There is a swipe card entry system and it just wouldn’t recognise our card.  After half a dozen attempts, the driver behind  got us in, very embarrassing!

With the awning up in record time, we  popped into Castleton for a couple of drinks.  Ended up staying for an early bird dinner in the Castle Hotel.

Went back to the caravan for a bit and discovered that the blown air heating had stopped working (luckily, we can still run the gas fire ok), but it didn't bother us that much,  so we then back to Ye Olde Nags Head for the Friday night pub quiz.  26 out of 50!  Oh dear!  We do particularly badly on the sport round.  The winning score was 37.  Last time they brought out trays of sandwiches and chips after the quiz had finished.  We waited and waited and waited…but none this time.

A walk up to the Kinder Scout plateau from Edale today.  The plan was to ascend via Ringing Roger (what a great name for a hill), walk along the edge for a bit, and then descend via Grindslow Knoll.  High point 601 metres but less than 5 miles, so not especially strenuous.  However, a mistake early on meant that we ended up going around Ringing Roger rather than over it, which was a bit disappointing.

Our first time on Kinder Scout, and some interesting rock formations… 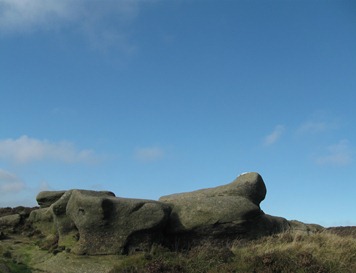 A meerkat on the left? 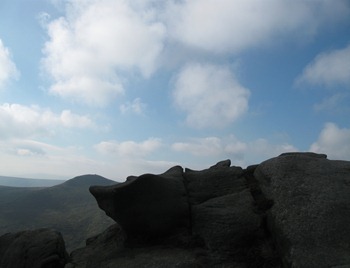 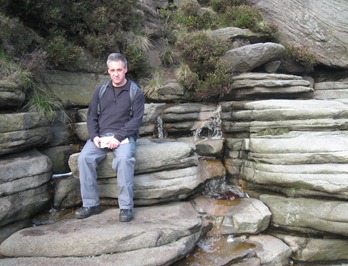 D on a waterfall After a quick drink in Edale (can’t remember the name of the pub) we went back to the caravan and lazed around.  Rain forecast for Sunday morning (correct for a change), so we decided to take the awning down.  We didn't really use it this time, but it got a good airing as it was packed away damp last time.

A bit of dinner and some light reading for J 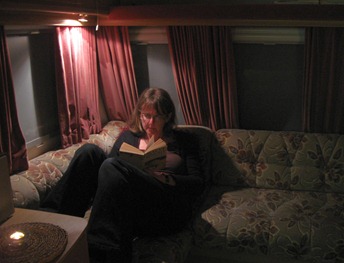 J happy to read but D a bit restless by 8.30 - he couldn't face another Pan horror story - so we headed back into the village for a couple more drinks.  Lots of groups of young people wandering around the village and filling the pubs up, so we didn’t stay too long!

A bit of a damp start, very pleased that we had taken the awning down on Saturday.  Left about 10 and got back to the storage place by 12.