A 2 night stay at Oxon Hall touring caravan park, just outside Shrewsbury, Shropshire.  A new county and a new site for us.

We really can’t think of anything bad to say about this site.  Large pitches, great facilities - the showers and toilets are immaculate and loads of them. There is also a shop that sells just about everything you could possibly need.

Right outside the site is a big Co-op, a Chinese takeaway and a fish and chip shop.  There are two pubs (which we didn’t try) within walking distance and it’s only a couple of miles from the centre of Shrewsbury.  There is a bus into Shrewsbury every half an hour during the day and it’s only a short taxi ride home at night.  All in all a five star site, which is what it says it is on the website.

Shropshire is quite nice too.

The plan was to get there at 1pm, which is the earliest arrival time, but en route we heard on the radio that the A483 was closed somewhere around Wrexham, so we had to find a different route – with minutes to spare!  J did very well navigating.  I suppose we could have used the satnav, but who relies on one of them when towing a caravan?!

So we arrived a bit later than intended, but not too much, and quickly set everything up.  No awning again.  We are thinking of selling it and getting a sun canopy instead, which would be so much quicker to put up. 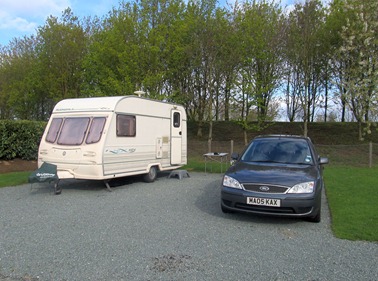 There was a bit of a scare with a leaky drain plug on the hot water heater.  We tried the onsite shop not expecting much,  only to be greeted by every caravan spare part you could ever need.

The site also has a large pond, so we were visited by some friendly ducks who helped us eat lunch!

Next, we headed into Shrewsbury.  There is a park and ride just down the road and the idea was to use that, but at £3.20 per person we decided it was too expensive and set off on foot.  For some bizarre reason they charge double fare if you arrive on foot.  We walked for a while, passing several bus stops before giving up and waiting for a bus.  Just as well we did because we had only got about a third of the way and were already on the verge of collapse!

There are lots of great pubs in Shrewsbury and most have a good selection of local ales.  The best was The Armoury with The Salopian Bar not far behind.  Best beer of the weekend…Shropshire Gold or Lemon Dream (both from the Salopian brewery) or Mary Jane or Citra…D really was spoilt for choice!  One of the pubs –The Kings Head is hundreds of years old and is in the street where J’s great, great, great grandmother lived so highly likely she came here too!  The town seemed very safe at night, no yobs roaming around. 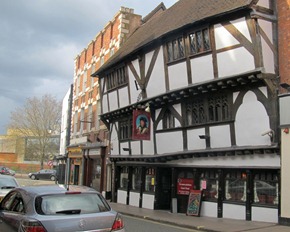 No buses after  7pm, so we got a taxi back to the site.  We really should start making the bed up before we leave to go out, as its the last thing you want to do late at night after a few pints!

Set off for a walk in the Shropshire hills today.

About a thirty minute drive from the site is Stiperstones.  This is a quartzite ridge formed 480 million years ago.  During the last ice age the summit stood out above the glaciers and was subject to constant freezing and thawing which shattered the quartzite into a mass of jumbled scree surrounding several residual rocky tors. At 536 metres it is the second highest hill in Shropshire.  Very rocky underfoot in places. 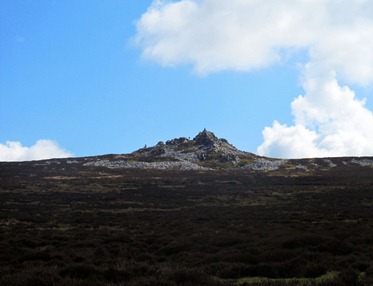 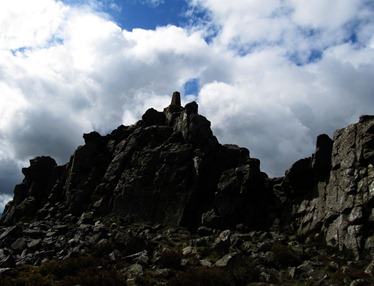 A bit of a scramble to the summit… 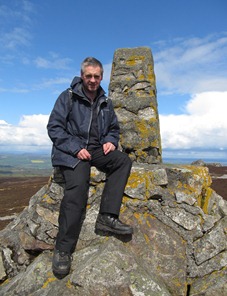 The best pic of the day is in the gallery, see if you can spot it!  The blue sky is a bit misleading because it did rain quite a bit!

Afterwards we had a quick drink in The Stiperstones Inn, which was empty when we went in but very quickly got very crowded, so we didn’t hang around.

Got back to the site mid afternoon, had a bit of a rest then headed off into Shrewsbury again.

We had the bright idea of getting a ticket from the park and ride, taking the car back to the site then using the ticket to get the bus cheap.  Arrived to find the machine taped up. Hurrah, no need for the elaborate plan,  so headed to the stop only to find the last bus into town had left hours ago!  Back to to the regular bus stop again -  a 10 minute walk away!

Had a drink in The Armoury and then walked along the river.  Shrewsbury is in a loop of the river Severn, so following the river you can walk almost all of the way around it, about 2 miles.  Not many pics of Shrewsbury due to failing camera batteries, but here are a couple! 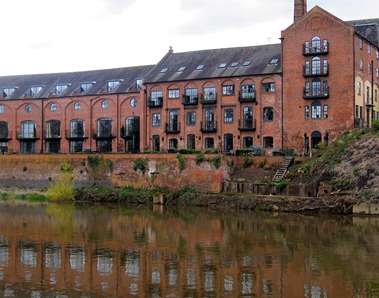 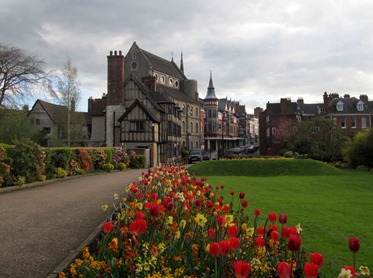 After yesterday’s excesses we decided to get the last bus back to the site for dinner in the caravan.  Then we spent the rest of the evening listening to Absolute 80’s radio, and started on some new library books which wasn’t as dull as it sounds!  Tried out our new DAB and FM radio, so if DAB reception is poor (which seems to be most of the time) we can revert to FM.  Previously we just had one or the other, and we never seemed to bring the right one for the area!

We just managed to pack everything away before it started raining and the journey home was very showery!

All in all a good trip and we will definitely return to this site.  It’s owned by Morris Leisure, which also has sites in Ludlow, Bridgnorth and Betws-y-Coed (which we’ve been to a couple of times).  We might try the Ludlow one next.

Castleton, Derbyshire, one of our favourite sites.