Not far to travel this weekend, to the CC site at Thurstaston, Wirral, a new site for us.  A typical CC site, with excellent facilities, spacious pitches, friendly wardens etc.

We set off in the rain and it was raining when we arrived, so we didn’t bother with the awning.  One of our better decisions, as it turned out.

As it was raining, we drove to West Kirby, a few miles away, and sat in the car watching wind surfers on the marine lake like a couple of OAPs. 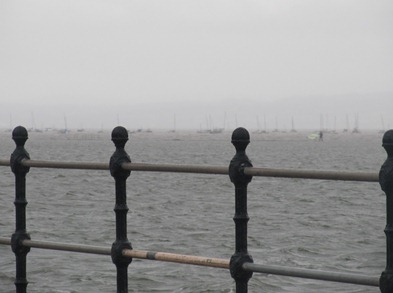 Walking on water?…actually the submerged walkway around the marine lake

On the way back we popped into the nearest pub to the site, The Cottage Loaf, to see what it was like.  It was ok, so the plan was to walk back later and have dinner…when it stopped raining.

But it didn’t stop raining, it got worse, with gale force winds, so instead we had dinner in the caravan and stayed in all night listening to the radio.  Forget Euro 2012 and the Olympics, it was the punk rock world cup final on BBC 6 Music…The Clash vs Buzzcocks.  The Clash won.

Then a couple of games of scrabble, both won by J…but very close!  If only D hadn’t got stuck with the Q! 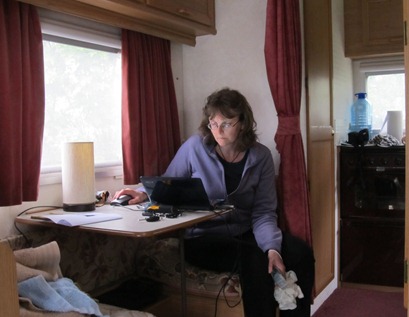 The bad weather continued throughout the night – we can’t recall a windier night in the caravan - but at some point it stopped raining.  In the morning it was just very windy.

We decided to walk to Parkgate and back, along the “beach”, about 9 miles in total.  Fleeces and waterproof coats on, we set off. 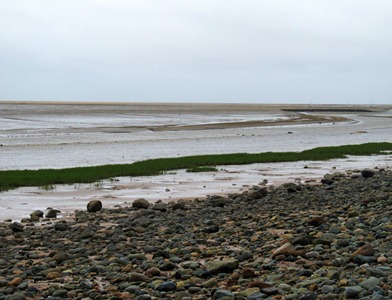 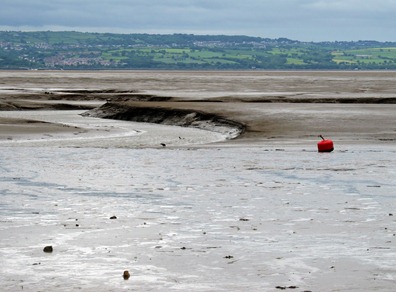 We made it to Parkgate and had lunch at The Boathouse, a really nice (but not cheap) pub.  After a couple of drinks we couldn’t face the walk back, even thought the weather was improving, and got a taxi instead.

Back at site we decided to have another go at geo-caching and after foraging for ages in nettles and ivy under a bridge we finally managed to find it.  J only got stung once!  A tiny little container with a list of names inside, but we are easily pleased.

We toyed with they idea of trying the social club belonging to the neighbouring static caravan site, but settled for another night in instead.  Anyone for scrabble?

A lovely day…blue sky, warm.  It’s always the same when we have to leave.