We weren’t planning to go away this weekend, the intention being to have the school holidays off.  But itchy feet are itchy feet, hence a last minute trip to the C&CC site at Windermere.

First thing we noticed on arrival was how empty the site was.  There were at least half a dozen empty pitches in the bit we were in, although some were waterlogged!  We expected it to be full, and it did get a bit busier on Saturday.

Usually at C&CC sites the wardens take you to your pitch and help with reversing, but not this time.  D did ok, although he had to abort the first attempt and start again. 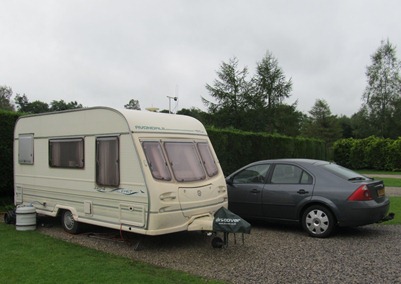 It was raining when we got there but it stopped just long enough for us to set everything up, then started again.  No awning this weekend.

It was only light, drizzly rain so we decided to brave it and walk across the fields to Staveley.

Had a drink under a canopy outside the Eagle and Child, beside the River Kent.  Then a visit to the Hawkshead Brewery Beer Hall for beer tapas, before finally settling in the other pub in the village, the Duke William.  We ended up staying until about 10pm and had to walk back across the fields in the dark.  Luckily it had stopped raining by then.

Awoke to the sound of heavy rain and discovered that some had got in through an open window and the corner of the bedsheet and duvet were soaking, although we didn’t notice it in the night.  It was due to the positioning of the aerial lead that we feed into the caravan through the window.

The original plan for today was to tackle Bowfell, but we got up far too late for that – there is very limited parking available in Langdale.

Instead we headed to Ambleside to climb Low (508 metres) and High (656 metres) Pikes and High Bakerstones (about 700 metres). 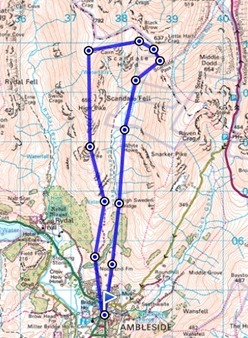 It was still raining a bit when we got there so we wandered around the shops for a while, hoping it would stop.  We finally set off around midday.

This was a longish walk for us, about 8 miles in total, and was very much a walk of two halves.  We soon entered the clouds and it was wet and damp to start with, followed by blazing sunshine on the way down.  Very wet underfoot on the way up.  The pics below tell the story. 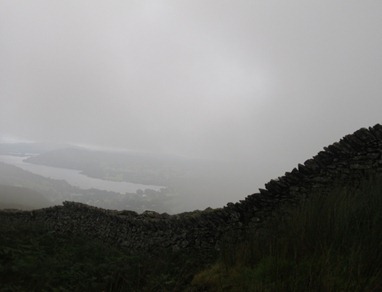 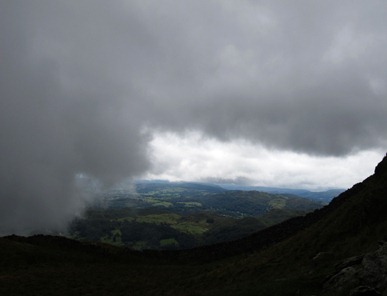 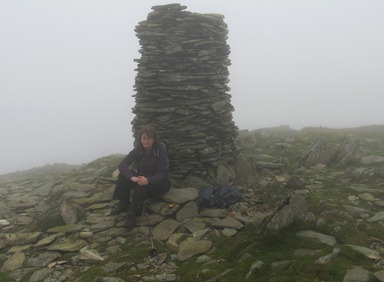 J at the summit of High Bakerstones – not much of a view today! 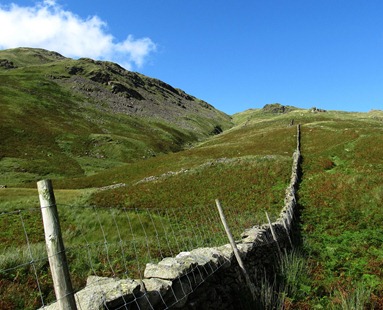 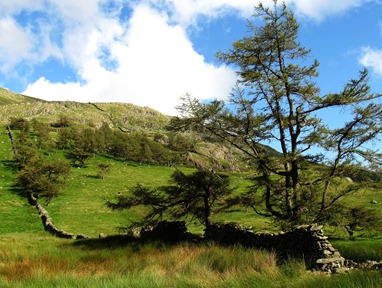 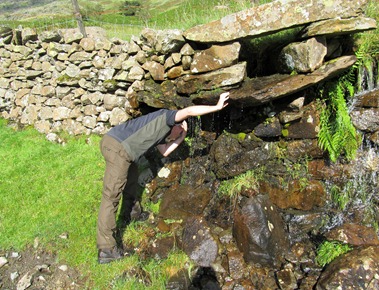 A natural shower for D on the way down!

Picked up a couple of geocaches on the way.  Geocaching is becoming very much a part of our walks now.

Because of the late start we didn’t get back to the site until 7ish, which we thought was a bit late for a barbecue.  Instead we had a barbecue without the meat…and a barbecue – so really it was just salad and quiche outdoors!

A fabulous sunset, which we all but missed because we were in the laundry room drying our bedding!  We rushed up into the fields around the site and D managed to get a couple of pics, the best of which is below. 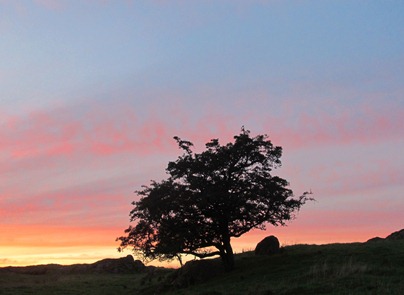 We planted a geocache under some rocks at the base of a tree and said farewell to Captain Jack Sparrow, who we picked up on our last trip.  I wonder where he will go next?  We have a trackable geo-coin which we are going to send off soon, but couldn’t find any way of attaching it to him, so I guess we will never know! 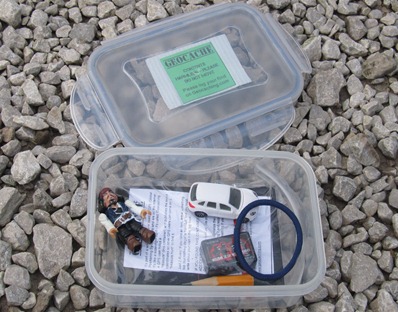 It rained a bit in the night but was bright and sunny by morning.  Packed up and headed for home, a very uneventful journey.