Ravenglass C&CC site.  Great location, quiet village with three nice pubs nearby, a bit of a beach, fabulous sunsets, good walking.  Ok, it takes a long time to get there, and the facilities are not the best, but it’s still our favourite site. 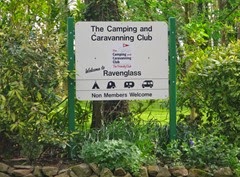 A Thursday start for a change.  Three night trips for us are usually Fri-Mon but we thought we’d try something different this time.  The journey took about three hours with a quick stop for tea. 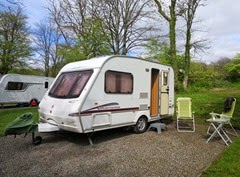 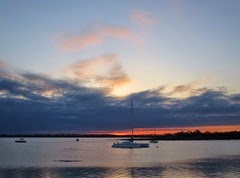 A short drive to the foot of the Hardknott pass, to tackle the summit of the same name.  549 metres, about 7 miles. 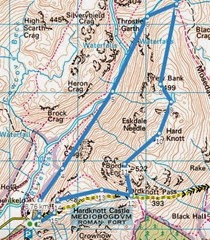 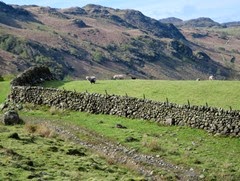 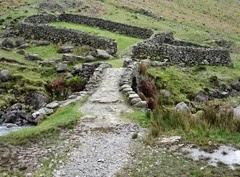 A lot of this walk was off path, so plenty of opportunity to get lost.  We didn’t, thanks to our GPS and a few easily spottable landmarks on the way.  We managed to miss the Eskdale needle, though, which we wanted to see.  Great views of neighbouring, higher, fells, including Scafell, Bowfell and Crinkle Crags. 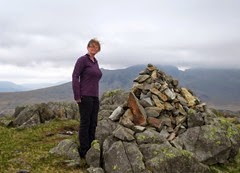 J at the summit of Hardknott 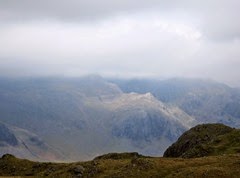 Stopped off in Boot on the way back for a pint for D and tea and a cake for J.  The Brook House Inn is still one of our favourite pubs anywhere.

It started raining soon after we got back to the site, but we’d previously booked a table at the Ratty Arms, so we had to venture out.  Not a nice night, but we had lovely salads in the pub, mixed seafood for D and mixed meats for J. 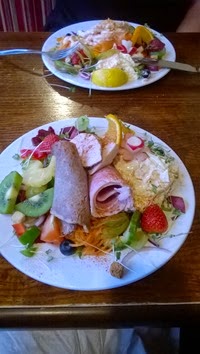 A day trip by train/bus to Barrow-in-Furness, primarily to visit Piel Island. 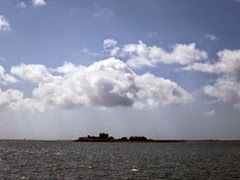 Piel Island lies half a mile (1 km) off the southern tip of the Furness Peninsula in the administrative county of Cumbria, though historically within Lancashire north of the sands. It is one of the Islands of Furness. It is the location of the English Heritage-owned Piel Castle.

The island is within the administrative boundaries of the mainland town of Barrow-in-Furness and is owned by the people of the town, having been given by the Duke of Buccleuch in the early 20th century. The Borough Council's administrative duties also include the selection of the "King" of Piel, who is the landlord of the island's public house, the Ship Inn. The area of Piel is about 50 acres (20 ha). As well as the landlord and his family the island has three other permanent residents who live in the old Pilots Cottages. 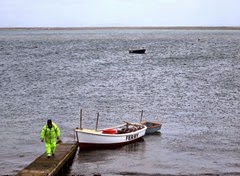 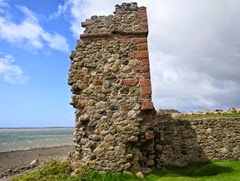 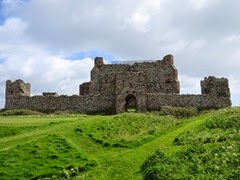 The “king” allows free camping anywhere on the island, but the facilities are pretty poor, so it’s not somewhere we are likely to stay!! 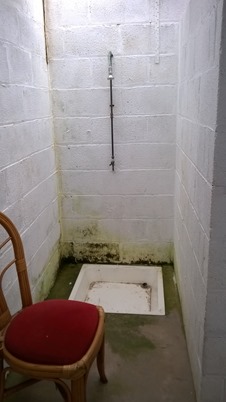 Had a quick look around Barrow town centre too, and picked up a book of barbecue ideas from a charity shop.  We are looking forward to our next one!

We ate in the caravan, then headed into the village for another great sunset and a pint in each of the pubs. 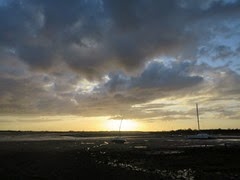 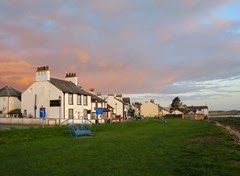 The downside to this site is the long journey, so we left early and got home just after midday.

Nothing for a couple of weeks, then somewhere in Yorkshire we think.