After three days in Keswick we decided it was time for a change, so we relocated to Hawes.

Not as easy as it sounds, the journey was not a good one, much of it on narrow country roads.  We followed the route suggested on the CC website, but it was pretty hairy in places!

We eventually made it in one piece and chose an excellent pitch surrounded by bushes and trees. 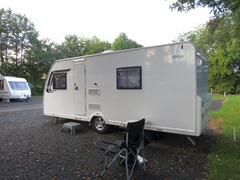 We have been putting a bird feeder up on recent trips, with mixed success, but this was to be the most successful yet.  We counted at least a dozen birds fighting for space at one time – they got through three fatballs and lots of seed in the two days we were there.

Not very good pics, with D regretting thinking the 5x zoom on the Canon S120 would be sufficient for mostly landscape photography. 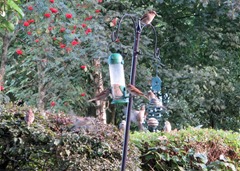 As is customary when we visit Hawes we headed straight for the Wensleydale Creamery.  Bought lots of cheese, but once again failed to see cheese actually being made!  Plenty of samples to try though After dinner in the caravan we walked to the nearby Green Dragon Inn, Hardraw, a favourite pub of ours.  Had a great time listening to local farmers talking about a recently purchased tup!  No cat on the bar this time, though!

A few weeks ago when we were looking at static caravans we popped into nearby Dent and thought it was nice…definitely worth a second visit.

A very showery day, we got soaked early on in a walk starting from the centre of the village.  Sometimes it’s good to walk in less than perfect conditions, and it did brighten up a bit. 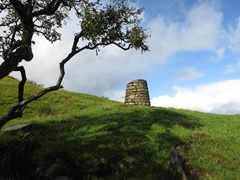 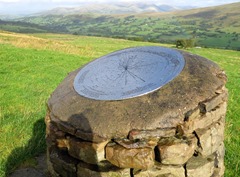 After a surprisingly enjoyable walk we had a look around a small museum in the village and a drink in one of the two pubs. 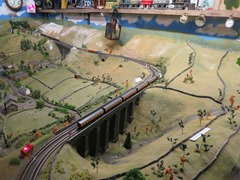 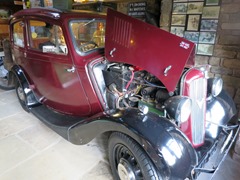 In the evening we had dinner in the fish and chip shop in Hawes…it has a small cafe attached.  Then a drink in one of the pubs.

Homeward bound after five nights in our new caravan, marred slightly when one of us left the battery compartment unlocked and it came open on the way home.  We discovered this when we got flashed on the M6 and stopped to investigate. The battery is okay, but the remote for the motor mover must have fell out somewhere along the way, so we need to get a new one for about £80!

A two night trip to Castleton.