There still aren't many sites open at this time of year.  We wanted somewhere easy to get to, not far from civilization, so we opted for Braithwaite Fold C&CC site. 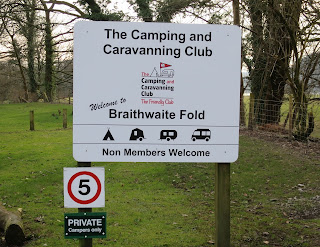 It's quite central, easy to get to and only a short walk into Bowness...but the pitches are quite small, the facilities are not the best and Bowness isn't our favourite destination in the lakes. It's a B list site.


We arrived early and there were plenty of pitches to choose from, and we got one of the larger ones. 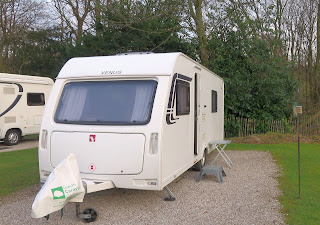 Then a bit of a disaster when we noticed that one of the tyres on our car was a bit flat.  It was okay when we set off and we didn't notice anything amiss while we were driving, but taking no chances we limped into Kendal and had it replaced.

On the way back we stopped off at Booths for supplies. 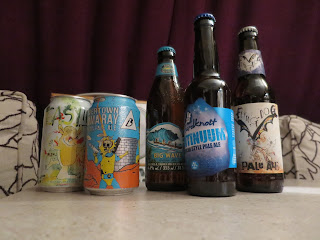 Couldn't decide which beers to get...so we got them all!

Then we walked into Bowness, had a look around the shops and tried a couple of pubs.  We just missed an accident, emerging from a shop to find a man wandering around moaning "he's drunk!" to anybody who would listen, apparently referring to the other driver who was just sitting in his car. He did look a bit out of it.  A couple of police cars turned up after a while.

There aren't any really great pubs in Bowness so we didn't stay out late, instead retreating to the warmth of the caravan to listen to the radio and play scrabble.  A victory for D tonight.

A long day today, thanks to our North West explorer bus tickets.  £10.80 each, so we were determined to get our money's worth.

To start with we got the 9.15 599 to Windermere station, then the 555 to Rydal, after tea and toast in Booths' cafe.  From Rydal we walked to Grasmere via Nab Scar, Heron Pike (612 metres) and Alcock tarn. 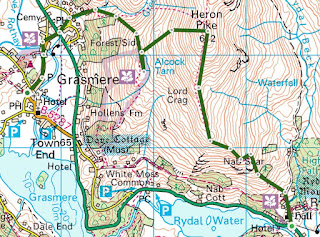 Two more Wainwrights ticked off, but when we got home and counted we found out we are still less than half way through them!  If only we had more time.

The weather was great for walking, but not great for pics, which is why there aren't many here. 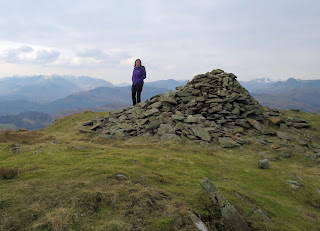 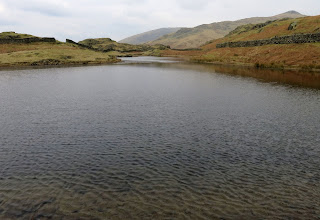 Grasmere seems to be okay again after the floods.  We had a look around the shops and then a couple of drinks in Tweedies Bar, before getting the 555 to Staveley.  We fancied some beer tapas from the Hawkshead Brewery beer hall.  We will be back in a few weeks for their spring beer festival.

We got back to the site about 9pm.  Four bus journeys in all.

We got the ferry to the other side of lake Windermere (excellent value at 50p each) and strolled along the shoreline before heading up into the hills.  It turned out to be a much longer walk than planned, we kept extending it because the weather was so nice and we didn't want to stop.  Lots of fallen trees to climb over, thanks to recent storms? 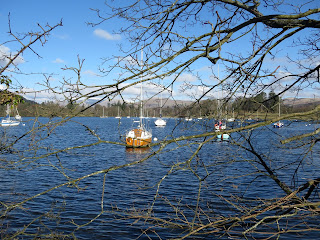 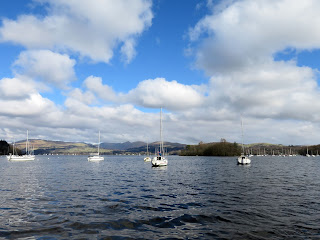 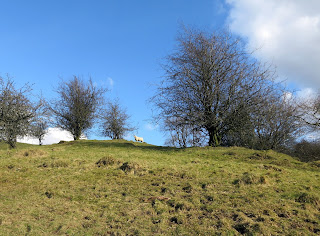 We ended up at the Cuckoo Brow Inn in Far Sawrey, and stayed for an excellent Sunday roast.

In the evening we thought about walking into Bowness, but we had wine, beer, cheese and crisps in the caravan and it was a very cold night! 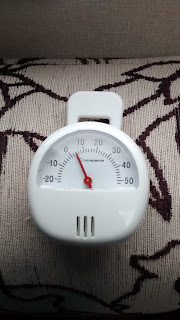 A frosty start to the day, we emptied the ice out of the water container, packed everything away, scraped the car and headed for home.  We were home before midday. A really good trip, we'll probably return to Braithwaite Fold around the same time next year.

A break of a couple of weeks, then the Hawkshead Brewery beer festival.