Easter is a time to stay at home for us, sites are far to crowded!  Most were back to normal this weekend, including the Coniston C&MC site, which is a favorite of ours.

We weren't quite able to take advantage of the unusually generous early arrival time of 10am, but we did get there just after midday and had plenty of pitches to choose from.  We settled on pitch no. 1, which is a spacious pitch in a quiet part of the site. 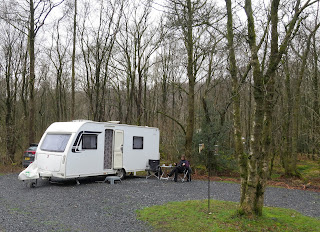 Lots of interest in our bird feeder this weekend, some welcome, some not so welcome... 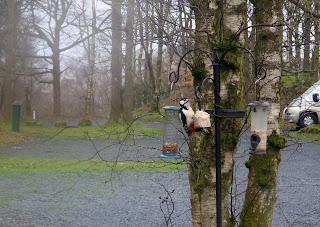 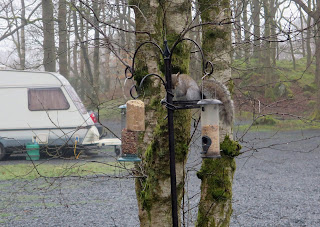 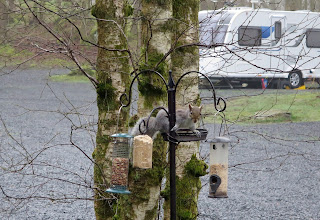 The squirrel made short work of the peanuts!

We headed into Coniston after setting everything up, which is about a two mile walk, and had a few drinks and dinner in the Yewdale hotel.  The pubs in Coniston are so nice we stayed out much longer than we had intended and didn't get back to the site until around 10pm.

The best day weather-wise, we went for a short walk from Low Tilberthwaite in the morning.  A small herd of deer crossed our path early on but they were much to quick for the camera and we didn't see them again. 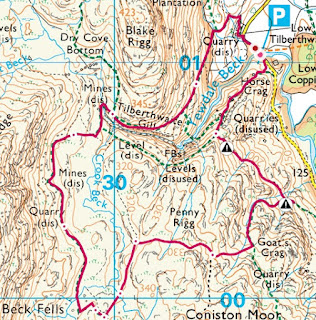 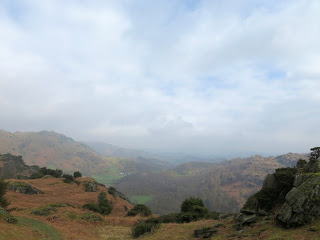 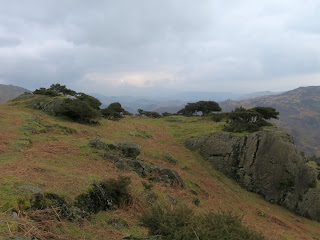 In the afternoon we headed back into Coniston and even managed to sit outside a couple of the pubs for a while.  We didn't stay out late, though, and had dinner in the caravan.  We were kicking ourselves for not bringing the barbecue, although it was probably just a bit too cold.  Next time, maybe.

D up very early for a strenuous walk, taking in Thunacar Knott (723 metres), High Raise (762 metres) and Sergeant Man (730 metres).  Three more Wainwrights bagged.  The rain held off but it was a bit misty and murky at the top. 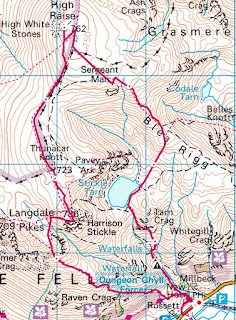 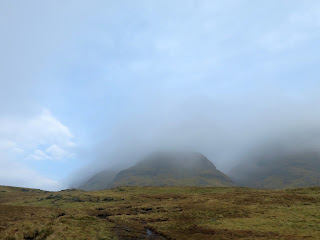 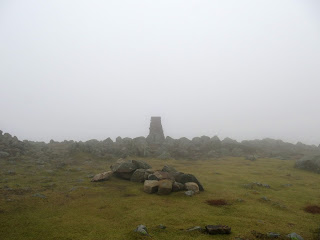 The summit of High Raise, the most impressive of the three 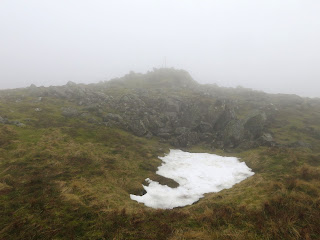 The last of the snow! 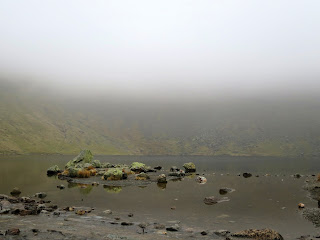 J didn't fancy it, so she pottered around the caravan until D got back around 1pm.

We managed to sit outside the caravan for while in the afternoon, until it started to rain.  We even had some visitors... 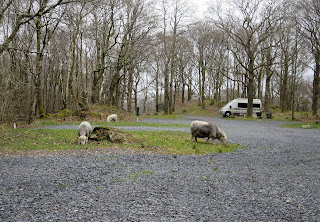 Escapees from a nearby farm, we enjoyed their company until the warden came and chased them away and it started to rain.  It rained heavily for a while and we were stuck inside the caravan.

We ventured out when it eased off late afternoon and trudged into Coniston again, for a roast dinner in the Black Bull, which was our pub of choice for the weekend.

No torch, so we didn't stay out late.

We always take cute lamb pics around this time of year, so here are some sheltering from the rain.  Very poor quality because it was taken on a phone in fading light... 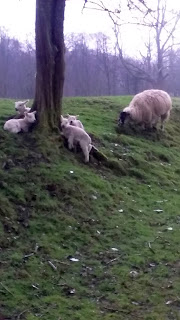 A hold up on the M6 meant we didn't get home until after midday, but apart from that it was an uneventful journey.

One more trip before our cruise to Norway in May, probably somewhere other than Cumbra for a change.