Our first trip since the end of November last year.  Not intentionally, we would like to be year round caravanners but circumstances got in our way this year.  Maybe next year.


We changed our car mid December.  We really liked the Kia Sportage and we never had any problems with it, but the lease was up and it had to go.  The new model Kia Sportage was too expensive, so we opted for a Nissan Qashqai instead.  About the same weight, power and torque as the Kia, but so far nowhere near as reliable!

Problem number one - a bit of trim around the passenger door doesn't quite match up.  Poor quality control, well it is made in the UK!  Not worth kicking up a fuss, we thought, and we've got used to it now.


Problem number two - we couldn't get a towbar fitted.  It's a new model so none of the towbar manufacturers currently make a towbar that fits it, something we found out when a mobile fitter turned up to fit one early in January.  Instead we had to get one fitted by Nissan, which turned out to be much more expensive and meant a bit of a delay.

Problem number three - a problem with the adblue system, which has just been fitted to the Qashqai and is supposed to reduce emissions.  A few days after the first warning message appeared it just wouldn't start and had to be towed to our local Nissan dealer.  It took over three weeks to fix, so we missed out on the nice spell of weather in February because the replacement car we got from Nissan didn't have a towbar.

Good things about the Qashqai - it's very economical.  That's about it.

Hopefully all the problems are out of the way now...apart from an annoying clicking noise from the clutch pedal which we'll probably have to learn to live with.  We had the same thing on a hated Vauxhall Insignia we had a few years ago.

Anyway, that's enough moaning about cars.  We wanted somewhere close to home to see how well it towed and to see if the caravan had survived the winter, so we chose the Southport CAMC site.  Same destination as our last trip last year. 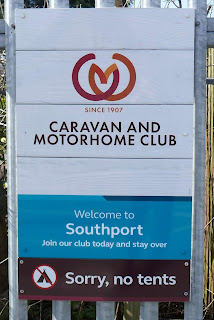 Despite a smaller engine the Qashqai tows at least as well as the Sportage, and we arrived just after midday after a journey that only took about 30 minutes.

All that was available was a non awning pitch, but we managed to get quite a good one. 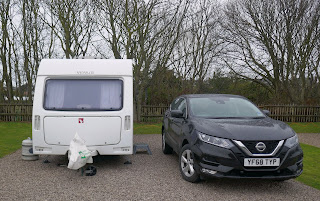 A sigh of relief when we found nothing wrong with the caravan after the winter break.

We are thinking of moving to somewhere in the Southport area later this year, so we went for a drive to have a look at a couple of roads with houses for sale. We're not really in a position to move just yet, as we are in the process of sprucing our house up a bit to make it more saleable!

Then we walked into Southport and looked around the shops and had some drinks in some of the pubs we like.  Our favourite this trip was the Bottle Room.  Only two beers on tap but lots of bottles and cans to choose from.  Luckily D liked one of the beers on tap.

We had a late dinner in the caravan and spent the rest of the night in.

A very windy day, in the morning at least, but not much rain and plenty of blue sky.  We went for a walk from the site along the beach towards Ainsdale. 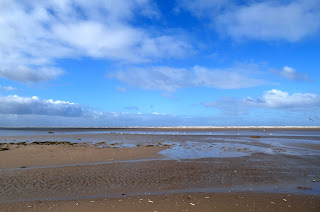 Just one pic this trip.

In the afternoon we walked into town and had a walk on the pier.  Last time we came to Southport the pier was closed for refurbishment, but it doesn't look like anything has changed, apart from the cafe at the end has had a bit of a makeover.  We did a lot of walking today, about 35,000 steps in total!

We had tapas in a Spanish/Turkish restaurant in the evening. http://www.bistrobarmed.com  Very nice food, and generous portions - we were too stuffed for dessert! When we booked they told us we had to be out before the belly dancing started at 8pm, so we went to the Bottle Room for an after dinner drink.  We had a look in the window on the way back to the site but there was no sign of belly dancers!  Southport on a Saturday night is like Liverpool city centre on a quiet Sunday!  We must be getting old, we like it that way.

It was raining when we woke up and we got soaked packing everything away, but luckily we were home before the high winds and hail storms arrived!

Windermere C&CC site, for the Hawkshead brewery spring beer festival, then Castlerigg Hall in Keswick.
Posted by Our Caravan Blog at 17:02