The (killer, according to the Daily Express) heatwave continues, as do our back to back trips.

No time to blog about last week’s trip to the Hawkshead Brewery beer festival, except to say D sampled lots of nice beers, probably one or two too many…

This weekend we were in Skelwith Fold, a site we have visited several times before.

Thinking the site would get pretty full, we arrived early and selected what looked like a good pitch.  It was only after we had unhitched the caravan that we noticed how sloping the pitch was, and the loud music coming from a nearby caravan.  There were other pitches and we could have moved…but we decided to put up with it. 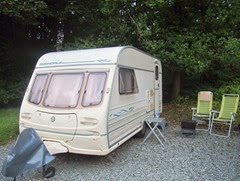 Whenever we come here we usually head straight for the Drunken Duck Inn, but we thought we would be a bit different this time.  Instead we had a wander around the site and lounged around the caravan, before an early dinner.  Then it was off to the Drunken Duck, normally a great pub to sit outside and watch the world go by, but not so this evening.  It was packed!

We decided to cut or losses and walked back past the site to Skelwith Bridge.  The Talbot Bar, which is part of the Skelwith Bridge hotel, was much nicer.  Great beers and lots of space to sit outside, we have always neglected this pub in favour of the Drunken Duck, but next time…who knows?  It’s a bit like a football manager who has to choose between two star strikers, a difficult decision but a nice one to have to make.  It’s not really practical to pick both, they are in opposite directions as you come out of the site.  To continue the football analogy, the Drunken Duck has been relegated and the Talbot Bar has been promoted.

Too hot for any serious walking today, so we went for a stroll in the hills to the west of Ambleside.  About 5.5 miles in total. 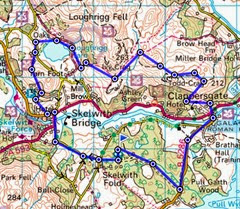 We took our time and had plenty of stops to admire the view.  Sometimes these low level walks are better than slogging up a big hill, especially on a day like today.  Excellent views of Ambleside and Lake Windermere once we got to the top, but no pics.  It was a bit hazy, so the pics didn’t turn out as well as they might have, and we don’t post any pics that are less than perfect! 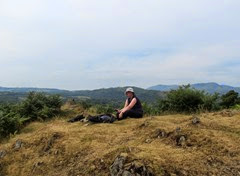 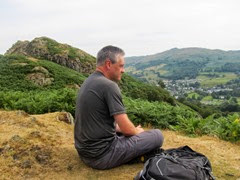 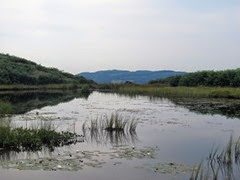 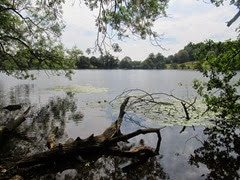 A semi successful barbecue back at site, then we caught the last bus into Ambleside and headed to Zeffirellis.  The Hugo Corbin quartet were pretty good, but we only stayed for the first half of their set.  Walking in the heat of the day had taken it out of us and we were pretty tired.  It didn’t help that the heating was on!!

We managed to get a taxi back to the site, which was just as well because it had started to rain heavily!

Up very early because we forgot to put the bit of cardboard over the skylight (no sliding black out screen for us) and we were on our way by 9.30.

We have never visited Skelwith Fold in high season before and we found it to be too full.  There is nothing separating the pitches and it was a bit car park like and over crowded.  We will come here again because it is handy for Ambleside, but not in high season.

Ludlow.  A new town and a new site.