We thought the site might be busy, so we got there early!  It did get very full,but we managed to get a reasonable pitch. 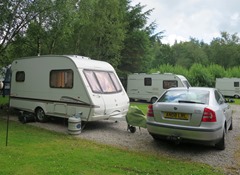 After setting everything up, including the newly purchased bird feeder, but not including the recently purchased wind break, we headed to the beer festival in Staveley.  Is it rude to put a wind break up?  A bit anti-social?  We bought it a few trips ago but haven’t had the courage to use it yet.

The beer festival was very busy but we managed to get seats and D sampled 13 beers…halves not pints!  J stuck to Lakeland Lager.  We were looking forward to some ambient chill out music in the malt loft, but it turned out to be very loud dance music.  Apart from that it was a very good night.  We even managed to get one of the settees for a while.

We stayed until about 10pm.

A wild and windy morning, so we didn’t go walking.  Instead we drove to Ambleside…D needed new walking shoes.

It cheered up a bit in the afternoon so we went for a walk to Ratherheath tarn, which is just around the corner from the site. 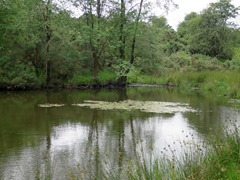 There is a static caravan park there with a vacant pitch, so we had a quick look.  It turned out to be D’s dream pitch… 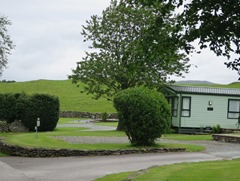 It’s the one in the distance backing onto the wall, with a patio area awaiting the arrival of a nice new caravan.  Actually, the site is a bit in the middle of nowhere, but it looked very peaceful.

After dinner in the caravan we headed back to Staveley for round two of the beer festival, only to find that they had run out of beer!  All they had left was their own, which is okay, but not what we came for.  A victim of it’s own success!

A much better day, so we went for a walk up Reston Scar.  Nice views of Staveley and Ings and the surrounding countryside. 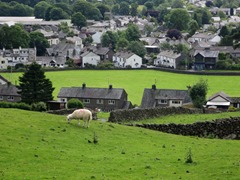 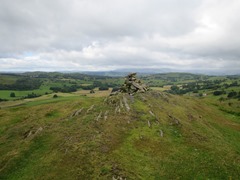 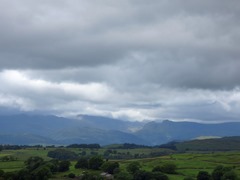 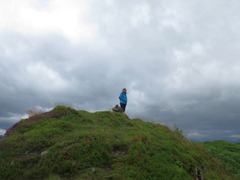 The beer festival was winding down when we looked in at lunch time, but we stopped and had some beer tapas before heading back to the site.  They were even starting to run out of their own beers!

It was pretty noisy back at the site…lots of children on bikes and scooters, televisions blaring, people playing guitars and singing…!  The noisiest we have ever seen this site.

We had a barbecue anyway, and tried not to be a miserable pair!

We were so taken with the vacant pitch at Ratherheath Lane that we decided to drive to a couple of pubs we thought might be within walking distance of it and see what they were like. They are not really within walking distance and weren’t very nice anyway! Might phone up and see how much the fees are anyway.  We are seriously thinking of getting a static or a seasonal pitch somewhere next year.  A view, or pub…it’s not an easy choice to make!!

Popped up into the hills around the site for the sunset, then had a drink in the on-site bar, the Whistling Pig, which was surprisingly nice. 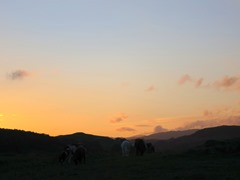 Home in time for lunch.