Our second visit to the Morris Leisure site a couple of miles outside of Ludlow. 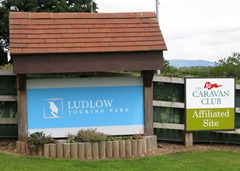 Last time we came here we had a horrendous journey and this time was pretty much the same, thanks mostly to Carfest, a festival in Cheshire.  Thanks Chris Evans.

We finally arrived about 3pm and were allocated pitch no.123, which is right next to a walkway leading to reception and the facilities block.  Not a great pitch, although handy for the excellent toilets and showers.  I suppose we could have asked for a different pitch…the site wasn’t full.  Well, the adults only bit was quite full, which is what we asked for. 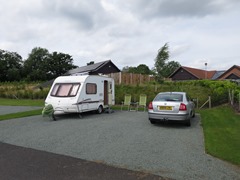 Massive pitches, which put even Caravan Club pitches to shame.

Ludlow is quite a long walk away, so, after a quick drive to the Ludlow Food Centre to pick up supplies, we thought we would stay in and relax around the caravan.  Had a barbecue and a few drinks and witnessed a blue moon (second full moon in a month). 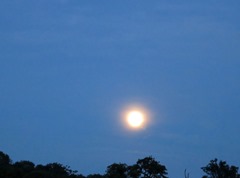 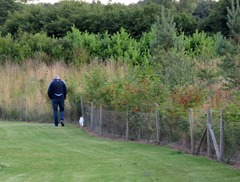 Equally rare…one man and his cat!

There was also a black cat hanging around the toilets and D managed to entice it into the caravan.  J shrieked and chased it out again.  Think it belonged to the wardens.

Headed to Titterstone Clee Hill, at 533 metres one of the highest points in Shropshire, complete with a golf ball like radar installation at the top.

We could have driven almost to the top, but we decided to walk instead, a decision we started to regret when we got a bit lost to begin with.  We made it to the top, though.  Excellent views of the surrounding countryside. 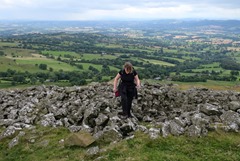 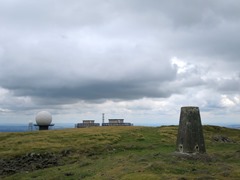 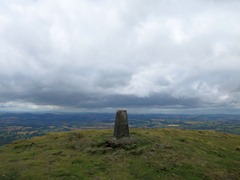 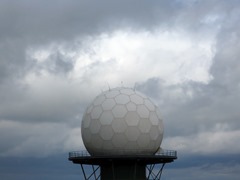 Back at the site we got ready to walk into Ludlow, but it started to rain just as we were about to set off so we decided to have another night in and do Ludlow the following day.

After a leisurely start to the day we strolled into Ludlow and had dinner in the Church Inn, home of the Ludlow Pie Company.  We both had a Wobbly Grunter pie and chips. 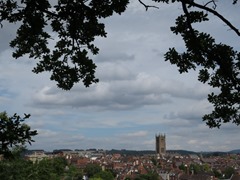 Nice view of Ludlow from a viewpoint across the river

There was a market on, and we had a look in the church and a walk around the castle, before heading back to the site about 7ish. 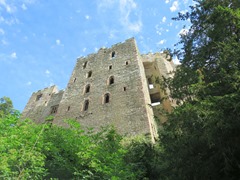 A third night in…unheard of!

A not quite as bas journey home, but still pretty bad, again due to Carfest! 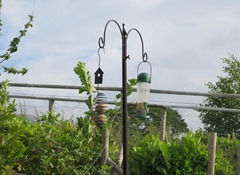 Our bird feeder…not a single visitor this weekend!

Possibly a two night trip to Kendal Caravan Club site, primarily to use as a base to look at static caravans in the area.  Our touring days might be coming to an end.