Another weekend, another trip to Cumbria.  This time a two night trip to the Caravan & Motorhome Club site just outside Coniston.


A Saturday start, partly due to work commitments but more to take advantage of a better weather forecast for the second part of the weekend.


Earliest arrival time at this site is 10am.  We couldn't get there that early, but we arrived around midday to find the site quite full.  This is a big site and we always end up driving around for a bit, then panicking and settling for a really shady pitch as far away from the toilets and showers as possible!  This was no exception. 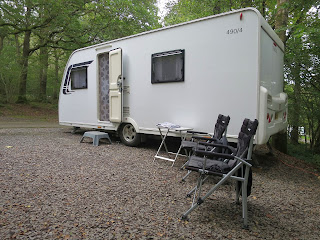 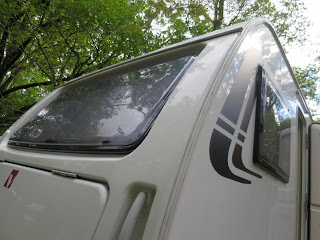 Actually the pitch was ok, nice and quiet with no immediate neighbours.

We sat around the caravan for a bit, then walked into Coniston, which is about a 2 mile walk going the scenic way.

There are four pubs in Coniston, the Sun Inn, the Black Bull and the Yewdale Inn.  The Yewdale Inn was probably our favourite this weekend.

We didn't stay out late, returning to the caravan for dinner.

Later we came to the aid of a damsel in distress.  The site is very dark at night and on our way to get showers we found a lady wandering around, hopelessly lost.  D walked back to the caravan to get the site map and we were able to return her to her pitch. Our good deed for the day.  J took a wrong turn on the way back, but managed to retrace her steps!

Last week it was Blea tarn, Eskdale. This week we headed for Blea tarn above Langdale.  Gridlock on the way, with about a dozen cars trying to squeeze past each on the approach to the Wrynose pass.  At one point our tyre touched the tyre of the car trying to pass us.  It took ages to get past, with cars going backwards and forwards to free up space, and more cars arriving from each direction.  Pretty nerve wracking!

We made it to the car park near Blea tarn, and set off on a walk up Side pike and Lingmoor fell. 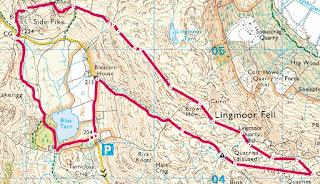 We've done this walk before, but it is a nice walk and would be high in our top ten...if we had a top ten.  Yewbarrow, Helvellyn, and the fells around Haweswater spring to mind.

A feature of the walk is a narrow gap that you have to go through, a crack in the rock. 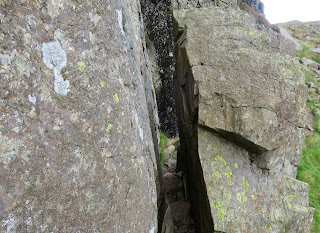 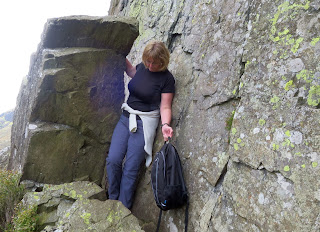 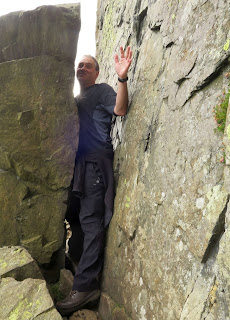 We made it...just! Excellent views of the Langdale pikes, Crinkle crag and Bowfell, especially from Side pike. 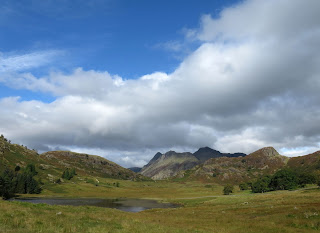 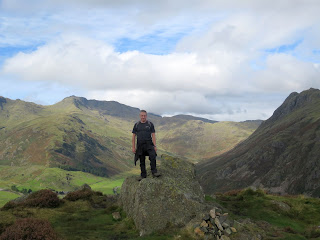 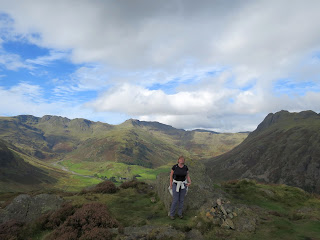 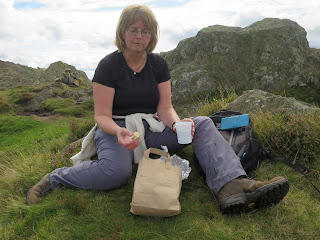 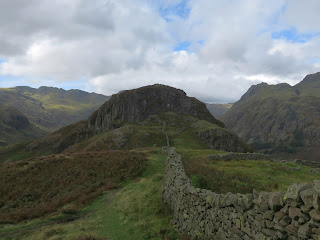 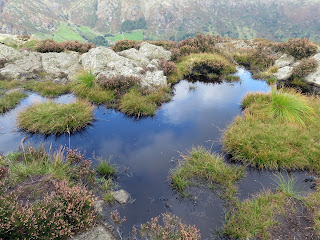 We toyed with the idea of a barbecue, but decided against it and instead had dinner in the Yewdale Inn.  A pork chop for J and a superb duck leg for D.  J's pork chop was served on a wooden board, which must have had a crack in it because the table was a bit slimy when they took it away!

Then a quick drink in the Sun Inn and the Black Bull.  The Sun Inn was very quiet tonight, at one point we were the only ones in there.  Still, there are very few villages that can boast three excellent pubs.

Very light rain when we woke up, but it soon turned into white cloud.  We didn't leave until 11am, which is very late for us.

Nothing booked until early October, but we might squeeze another trip in before then if the weather is nice.