Third trip of the year and our second new site, Woodclose Park, just outside Kirkby Lonsdale.

Before setting off there was just enough time to catch the solar eclipse... 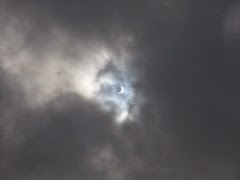 Quite pleased with this pic

Not a very long journey, so we arrived just after 1pm, the earliest arrival time at this site.  Our hearts always sink when we are allocated pitch no.1.  On this site pitch no.1 is right next to the bins which were right next to the facilities block.  We asked if we could change to a different pitch but the receptionist politely said no!  Not a good start. 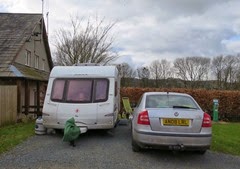 Second gripe of the day was the toilets.  Shower, sink and toilet all in one room is ok, but the frosted glass panel in the door isn’t ok in our opinion.  You can’t see anything through it, but…!  Not as bad as a hotel we stayed at in Amsterdam, but that’s another story.

It’s only a short walk into Kirkby Lonsdale and that’s what we did.  The pic of Devil’s Bridge, which we had to cross to get to the town, didn’t make it into the blog, but we like the story, so here it is.

The bridge was probably built by the monks of St Mary's Abbey, York. In common with many bridges of the same na,me, legend holds that the Devil appeared to an old woman, promising to build a bridge in exchange for the first soul to cross over it. When the bridge was finished, the woman threw bread over the bridge and her dog chased after it, thereby outwitting the Devil. Several large stones in the surrounding area, including the Great Stone of Fourstones, are ascribed to the Devil's purse-strings bursting open as he ferried masonry to build it. 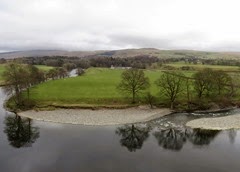 Lot’s of pubs to choose from.  Our favourite was the Orange Tree and we couldn’t resist their wide selection of burgers.  Kiwi burger for D, chicken, brie and cranberry for J.

A favourable weather forecast, so we thought we would do something a bit more strenuous than we have been used to of late.  Ingleborough, 723 metres, second highest peak in Yorkshire.  We parked in Ingleton and got a bus to nearby Clapham, then walked back to the car via the summit, a walk of about 9 miles.  Car parking and bus fare very reasonable, unlike Cumbria. 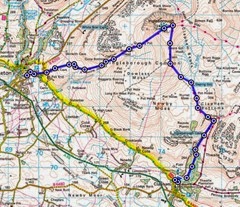 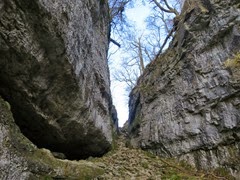 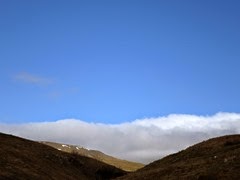 First glimpse of Ingleborough, still a long way away! 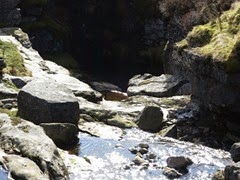 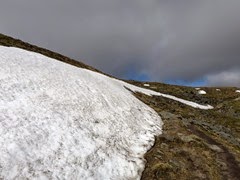 Winter not quite over yet at the top!

The summit of Ingleborough is a flat open space, a bit like Helvellyn, but it was bitterly cold today so we didn’t hang around for long. 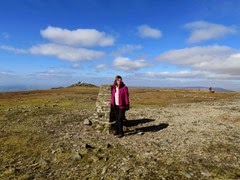 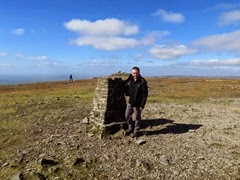 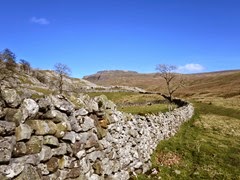 Looking back at Ingleborough

We had a quick look around Ingleton, including a few minutes watching a non league football match.  Didn’t see any goals. 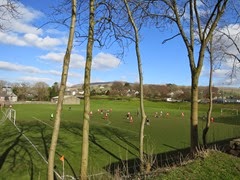 We had dinner in the caravan whilst the occupants of four caravans at the other end of the site had a group barbecue.  It must have been freezing! 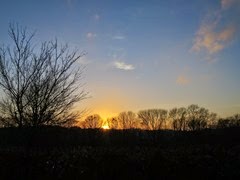 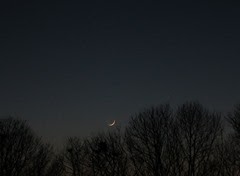 The we went back into Kirkby Lonsdale and had a couple of drinks in the Orange Tree before retiring to bed.  It was a very cold night!

We were awake very early, so we got up and popped into Kirkby Lonsdale for breakfast before heading for home.  A good trip, but I don’t think we will be coming back to this site.

Nothing booked, but we might try and squeeze another trip in before Easter.